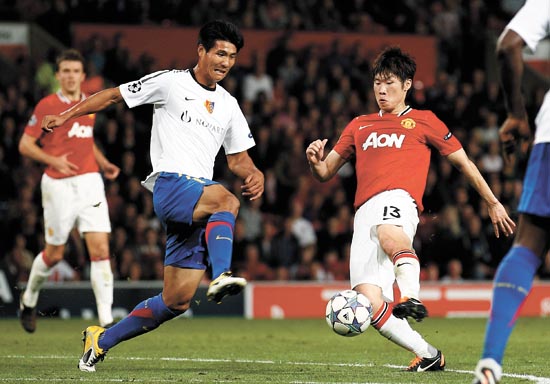 
LONDON - Manchester United collapsed against Basel before salvaging a 3-3 draw in the Champions League on Tuesday while Real Madrid cruised to a 3-0 victory over Ajax.

The drama at Bayern Munich took place off the pitch with Carlos Tevez refusing to come on for Manchester City during its 2-0 loss.

Real Madrid swept aside Ajax after goals from Cristiano Ronaldo, Kaka and Karim Benzema in the Group D meeting of two sides who have 13 European Cups between them.

Inter Milan picked up its first points in Group B after Mauro Zarate clinched a 3-2 win at CSKA Moscow but Trabzonspor stays top after drawing 1-1 with Lille.

At Old Trafford, United did not appear to miss its injured first-choice strike force of Wayne Rooney and Javier Hernandez.

United scored twice in two minutes in the first half to put United 2-0 up by the 17th minute through Danny Welbeck, with 37-year-old Ryan Giggs providing the passes for the 20-year-old.

But United’s defense crumbled in the second half after Fabian Frei pulled Basel’s first goal back in the 58th minute.

But Young produced a late leveler, sending a downward header into the net after meeting Nani’s cross.

The draw leaves United without a win and with just two points after two matches, while Basel is top of the group with four along with Benfica, which beat newcomer Otelul Galati 1-0.

“We were careless - it’s a wake-up call in many ways,’’ United manager Alex Ferguson said. “A lack of concentration saw us give the game away really .?.?. but we rescued it.’’

There was no comeback in Munich for Man City as Mario Gomez twice knocked in rebounds from goalkeeper Joe Hart to put Bayern 2-0 up before half time.

The victory left Bayern in control of Group A with a perfect record after two games, while City has one point - as well as having to deal with insubordination.

City manager Roberto Mancini wanted to bring Tevez off the bench in the second half as City was trying to recover from 2-0 down, but the Argentina striker refused to take the field.

“If I have my way he will be out of the club,’’ Mancini said, while stressing that the club’s Abu Dhabi owners would make the final decision.

Despite being the Premier League’s joint-top scorer last season, the striker has featured infrequently this campaign after failing to secure a transfer in the offseason.

City is being kept off the bottom of Group A by Villarreal, which has no points after losing 2-0 at Napoli.

Real Madrid enjoyed the biggest victory of the night to stay top of Group D and leave Ajax on one point.

Cristiano Ronaldo swung the game in Madrid’s favor with his 25th-minute opener at the Santiago Bernabeu stadium.

Kaka doubled Madrid’s lead before halftime and set up Karim Benzema to decide the game early.