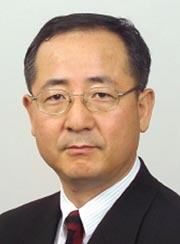 “President Lee Myung-bak made the decision today,” Kim Hyo-jae, senior secretary to the president for political affairs, said yesterday. “Choe is a journalist with expertise and is praised for his flexible thinking and pragmatic personality.”

Kim said the Blue House expects Choe, as the new senior secretary to the president for public relations, to help improve the public’s understanding of the Lee administration’s policies and to better communicate with a wider spectrum of society.

Choe will replace Kim Du-woo, who abruptly resigned on Sept. 15 over a corruption allegation.

A native of Yeoju, Gyeonggi, Choe, 53, graduated from Seoul National University in 1985. He began his journalism career at MBC in 1984 and moved to SBS in 1991.

He served as the network’s Washington correspondent in 1998 and worked in various key posts afterward, including as head of SBS’ news department.

Meanwhile, Kim was detained late Tuesday night after the Seoul Central District Court issued a warrant allowing prosecutors to hold him for further questioning about suspicions that he received 100 million won ($85,400) in bribes from Park Tae-gyu, a key lobbyist for Busan Savings Bank Group, in return for his help in rescuing the failed financial company.

The court said it issued the warrant because of the risk of evidence destruction.