Electronic music armada on the way

Electronic music armada on the way 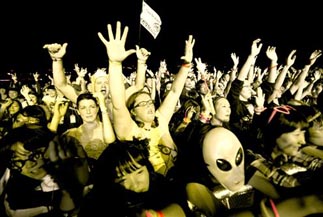 The third Global Gathering Korea will be held on Oct. 8 at Nanji Hangang Park in Seoul. The music festival was initiated in Britain back in 2001 and later launched in numerous countries including Russia, Poland and Turkey.

It landed in Seoul three years ago and received rave reviews from clubbers because of its venue - the festival is held in an open-air space right next to the Han River - and the plethora of big-name electronic music acts. This genre has a minority but cult-like presence among Korean youth.

According to co-organizers of the festival, VU Entertainment and CJ E&M, the lineup for this year includes six foreign musicians, including Groove Armada, The Digitalism, Example and Yolanda Be Cool. Some 28 Korean musicians will perform, such as 360Sounds, The Koxx, Mongoose, Glen Check and actor and DJ Ryu Seung-bum.

The festival begins at midnight and is strictly for people over 19. Last year, organizers said it attracted 20,000 visitors but an additional 20 percent are expected this year.