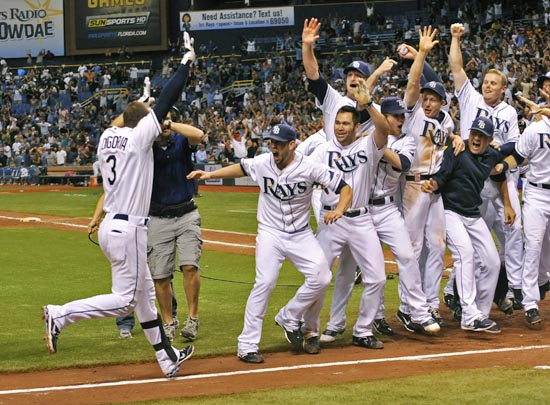 Tampa Bay Rays’ Evan Longoria, left, runs to home plate to celebrate with teammates after his 12th-inning home run to defeat the New York Yankees 8-7 during their American League baseball game in St. Petersburg, Florida, on Wednesday. Down 7-6 with two outs and two strikes in the bottom of the ninth, Dan Johnson’s pinch-hit home run kept the Rays’ season alive. Tampa Bay would go on to win the American League wild card after overcoming the largest September deficit in MLB history. The Red Sox, only needing a win to clinch a playoff birth, lost to the Baltimore Orioles after blowing a one-run lead in the bottom of the ninth. [REUTERS/YONHAP]