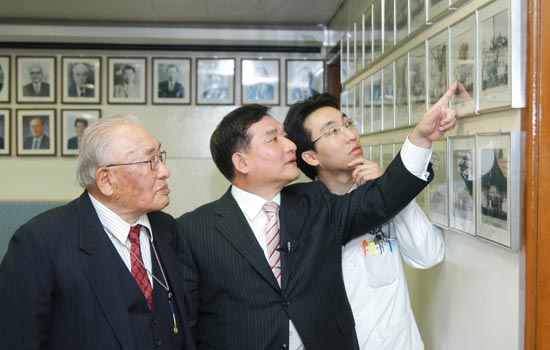 
A Korean proverb warns not to accept medicine from a doctor unless his parents and grandparents were also practitioners, this is testament to Korean people’s distrust of strangers and their faith in the ability of older generations to pass down greater wisdom and expertise.

Fortunately for sceptical local people, a handful of Korean doctors fit the bill of having three generations of surgeons in their immediate family lineage.

They agreed that the image of their respective fathers wearing doctor’s gowns had influenced them from an early age and they felt destined to follow suit.

Compared with other departments such as dermatology or ophthalmology, the surgery department is not popular with medical interns when they choose their specialty due to the comparatively poor salaries it offers.

For Han, however, money wasn’t such a big deal. The paternal line of his family soon picked up the nickname “Three Generation Surgeons” as the three men’s skill in successfully conducting surgeries on the stomach and colon were nothing if not formidable. They all graduated from Yonsei University’s College of Medicine and opted to be become specialists with the surgeon’s scalpel.

“My interest in the surgery department began during the Korean War,” said 93-year-old Han Hee-chul, the eldest of the three and a former director of Chuncheon Cheil Hospital.

“People’s lives depended on the skills of surgeons and I thought there was no more honorable profession,” added Han, who resides in Chuncheon, Gangwon.

In 1961, he established the “Han Surgery” - the hospital’s former name - and became the first surgeon to conduct a stomach surgery in the province. As his reputation began spreading across the country, the small hospital got so full at times that patients had to stay in nearby inns.

Meanwhile, his son inherited his father’s talent and now ranks as a leading authority on cancer surgery in Korea.

“I remember peeking through a glass window to watch my father operate in the 1960s and every time I thought the operating room was the most sacred place in the world,” said Han Won-gon.

After witnessing his grandfather and father’s passion for their job, 29-year-old Han Yoon-dae became a public health doctor and surgeon.

“Doctors have to help people at all times, even during wars and natural disasters, so surgeons skilled with a knife are essential,” he said. “I followed in my relatives’ footsteps and I’m just thankful I was able to get such good guidance from them along the way.”

In contrast, Noh, the director of the Miz Medi Hospital, is a respected obstetrician and an authority on sterilization for birth control. His father Kyeong-byeong, who died in 2003, served as a director with the Korean Hospital Association and established the Cheil Medical Center in 1963. He was the first to use radiation treatment for uterine cancer in Korea.

The youngest of the three Noh’s, 30-year-old Seong-il, is a resident at Yonsei University’s Severance Hospital in the gynecology department - meaning he has followed the same trajectory as his ancestors.

“My father once told me a story about saving the lives of a mother and baby during an operation. He said there were few feelings greater than bringing new life into the world,” said Noh Seong-il. “I always admired that.”

Prof. Shin Hee-chul of Seoul National University Hospital’s gynecology department also ranks as an authority in high-risk deliveries. His grandfather, Shin Pil-ho, who died in 1952, was the first obstetrician to establish an obstetrics hospital in Korea. The second of the three Shins, Han-su, who passed away in 1970, was also a professor at the gynecology department of Seoul National University Hospital. “I was always destined to be an obstetrician,” said Shin.

Another family specializes in otolaryngology, more commonly known as the ear, nose and throat (ENT) department. Jeong Myeong-hyeon, a professor in this area at Severance Hospital, also followed his father and grandfather into this line of work after Jeong Ki-seop set up the “Jeong ENT Clinic” in Anguk-dong, central Seoul, in 1932.

All three men worked at the clinic, which is now run by the youngest Jeong’s uncle as the renamed and relocated “Third-generation Jeong ENT Clinic” in Bundang, Gyeonggi.

For Kim Young-ho, also a third-generation ENT specialist, keeping it in the family pays dividends.

“It’s great that I can seek advice from my dad to find the best treatment for patients,” he said.