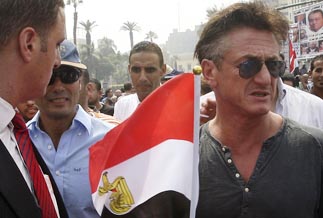 CAIRO - U.S. actor Sean Penn joined thousands of Egyptian activists who packed downtown Cairo on Friday demanding that military rulers speed up the transfer of power to civilians and end emergency laws once used by Hosni Mubarak against his opponents.

Local media said Penn, holding an Egyptian flag, walked with Egyptian actor Khaled el-Nabawi in Tahrir Square, where Egyptians demonstrated in what they dubbed as “Reclaiming the Revolution” day amid growing discontent over the way military rulers had managed the transitional period.

“The world is inspired by the call for freedom by the courageous revolution of Egypt for its freedom,” Penn said in remarks carried by Al-Ahram newspaper’s online page.

“Clearly that is not a completion overnight, there are still struggles forward, there are constitutional issues, there is ... a transition of power from the military to the people,” he added.

Nabawi said he had invited Penn to visit Egypt as part of efforts to demonstrate that Egypt was a safe place to visit despite the uprising. “We want to show that Egypt is safe,” Nabawi said.

The military council has said parliamentary elections will start Nov. 28 with a mixed system of proportional representation and individual lists. Most political groups fear the system will allow Mubarak supporters to return to office.

“This week is different because we feel that our revolution has been stolen from us,” said Yasser Fouad, an unemployed 38-year-old, his voice drowned out by loudspeakers urging people to ensure the protest remained peaceful. “None of our demands have been achieved. We want them to hand over power immediately through elections.”