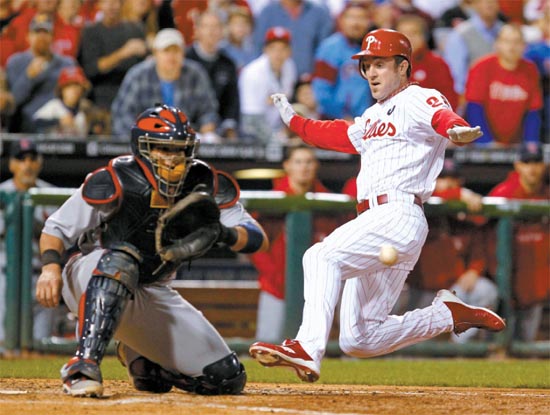 Philadelphia Phillies second baseman Chase Utley beats the ball to the plate as St. Louis Cardinals catcher Yadier Molina waits to make the play in the seventh inning of Game 1 of their National League Divisional Series in Philadelphia, on Saturday. The Phillies won in an 11-6 rout. [REUTERS/YONHAP]


ARLINGTON, Texas - The Texas Rangers pressured Tampa Bay pitcher James Shields into an uncharacteristically wild performance and beat the Rays 8-6 on Saturday to square their American League Division Series at 1-1.

The Rangers fell behind 3-0 early and it looked like their home record in the AL Division Series was going to slip to 0-8. Texas pitcher Derek Holland issued a bases-loaded walk in the first to open the scoring, then allowed a two-run homer to Matt Joyce in the top of the fourth.

The game turned around in the bottom of the fourth. Elvis Andrus was hit by a pitch leading off the inning. Josh Hamilton then singled, and Michael Young’s single loaded the bases.

The Rangers then got their first run of the series when Shields hit Adrian Beltre with a fastball near his left knee, forcing in a run.

Mike Napoli followed with a full-count single that drove in two runs, tying the game 3-3.

After a strike out, Shields threw a wild pitch to David Murphy, allowing Beltre and Napoli to move to second and first, respectively. Murphy worked the count full then swung and missed at a pitch, but the ball ricocheted away from the catcher, allowing Beltre to score. Napoli came home on Mitch Moreland’s grounder, making it 5-3 to the Rangers.

Consecutive singles to start the sixth ended the night for Shields. Kinsler sent both of them home with a double to make it 7-3.

Shields allowed seven runs in five-plus innings. He had thrown eight scoreless innings at Texas on Aug. 31, then allowed only one run in a complete game victory against the Rangers five days later. He had hit only five batters and thrown four wild pitches over 249 1-3 innings in his 33 regular-season starts before Saturday’s horrible fourth inning.

Still, Tampa Bay almost rallied. In the top of the seventh, Desmond Jennings walked, B.J. Upton followed with a single and Evan Longoria hit a homer to make it 7-6.

Texas’ Moreland eked that buffer out to two runs with a towering solo homer in the bottom of the eighth.

The Rays got a man on base in the ninth, with the tying run at the plate, but successive fly-outs ended the contest.

Game 3 in the best-of-five series is Monday in Tampa. Colby Lewis pitches for the Rangers against David Price.

In New York, Robinson Cano hit a grand slam and drove in six runs, while rookie Ivan Nova pitched brilliantly into the ninth inning as the New York Yankees shook off a 23-hour rain delay to beat the Detroit Tigers 9-3 in their suspended playoff opener.

A day after rain wiped out aces Justin Verlander and CC Sabathia, the game resumed in the bottom of the second at 1-1.

In Milwaukee, pitcher Yovani Gallardo struck out nine batters to match a franchise postseason record, leading Milwaukee to a 4-1 win over Arizona in Saturday’s opener of their National League Division Series.

He retired 14 of 15 during one stretch, perhaps helped by shadows cutting across the infield. With an early start time, the sun peeked through the retractable roof all afternoon, creating a shifting pattern of shadows between pitcher and batter.

Gallardo gave up just one run - Ryan Roberts’ eighth-inning homer - over eight innings to take the win in his first postseason start since 2008.

In Philadelphia, Ryan Howard hit a three-run homer in the sixth inning that put Philadelphia ahead to stay, beating St. Louis 11-6 in the opener of their American League Division Series.