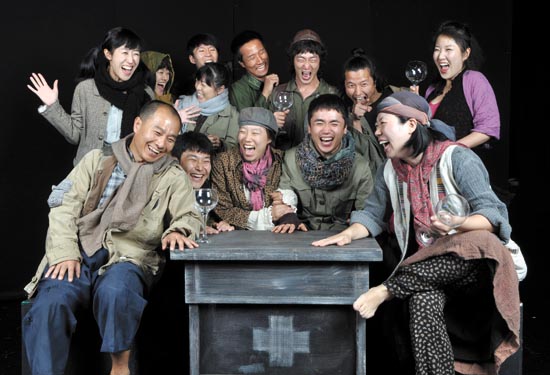 A still from “The Tears of a Mouse,” which tells the story of a mouse family to illustrate the effects of war. Provided by the Michoo Theater


YANGJU, Gyeonggi - Korean-Japanese playwright and director Chong Wishing was watching his actors rehearse on a recent afternoon late last month at a studio at the Michoo Theater in Yangju, Gyeonggi. He was intensely focused and actively involved, frequently stopping the action to change the blocking or offer his opinion on the reading of a line.

A piece of A4 paper placed on one corner of the wall reminded them that they have 12 days to go before the premiere of the play “The Tears of a Mouse” that he wrote and directed. The play is about a four-member mouse family that moves from place to place to survive an ongoing war.

“I want you to pat him down more quickly. That will work better,” the 54-year-old director told one of the actors through an interpreter for a scene where one of the soldiers tricks a young male from the mouse family into joining the army by telling him that he can get food and a monthly paycheck if he enlists. The soldier also gives the boy a good pat down and plenty of compliments.

Though the schedule has been grueling, with 10-hour rehearsals, it is Chong’s desire for perfection that has made him popular with critics and audiences in Korea and Japan.

His play “Yakiniku Dragon” sold out when it was staged here in March and in Japan and Korea in 2008. The play, which is about ordeals of a Korean-Japanese family trying to make a life for themselves in Japan, won numerous awards.

It was named Best Play of the Year at the 8th Asahi Performing Arts Awards and won the 43rd Kinokuniya Theatre Award and the 13th Tsuruya Nanboku Drama Award.

It was also extremely popular here, where the plight of Koreans living in Japan is still a sensitive topic.

It was selected as one of the top three plays of the year by the International Association of Theatre Critics-Korea and was one of the seven best performances of 2008 selected by the monthly Korean Theater Review.

His new play, which deals with the tragedy of war, is filled with a mix of tragedy and comedy with dialogue that is as witty as it is endearing. And though the protagonists are mice, Chong’s message remains intact: “Everyone has good times and bad, but that’s part of life.”

That’s a lesson Chong has learned in his own life.

Like the human characters in previous works, who have represented the fringes of society, Chong had a harsh life growing up as a Korean-Japanese resident of Japan, where Koreans still struggle in a country that has not yet fully accepted them.

In various interviews with the Korean media in recent years, Chong recalled the best job a Korean-Japanese person could get back in those days was operating a junkyard or running a restaurant. He has said he could not even dream of a better life because he was born and raised in a shack right next to Himeji Castle, a Unesco World Heritage site and popular tourist destination. Surrounded by rough and tumble street people, Chong lived in the shack with a grandmother who was longing to go back to South Korea. But he said it was those days of poverty that enabled him to write.

The Korea JoongAng Daily talked with Chong with the aid of an interpreter about his upbringing, his work and his experience as a Korean-Japanese person. The following are excerpts from the interview. 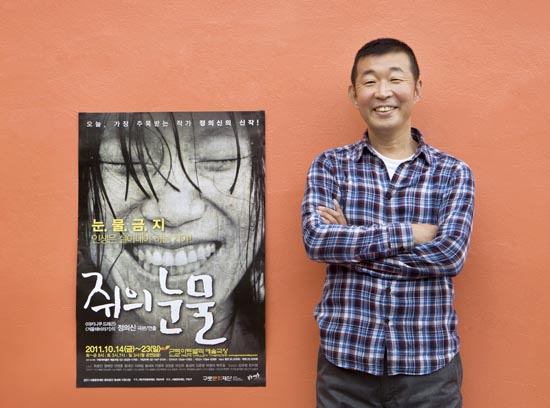 Famed Korean-Japanese playwright and director Chong Wishing returns to Korea with his new play “The Tears of a Mouse” this month. By Park Sang-moon


Q. Seven months have passed since “Yakiniku Dragon” closed in March. Have you been working on “Tears of a Mouse” since then?

A. It was actually staged two years ago in Japan as an opera, but this is the first time it will be presented as a play. Although the story is the same, the format and music are different. I actually see them as two different works.

Why are the characters mice?

It occurred to me one day that the tears of mice may be small but their significance is bigger than the entire world. The funny thing is I wrote three pieces for the Japanese opera troupe: the protagonists were robots, then raccoons, then mice. [Laughs.]

What inspired you this time?

The idea for the play came from “Mother Courage and Her Children” by German playwright Bertolt Brecht, but I started thinking about people who are affected by war, like Suzu and Mangan [the mouse parents who lose their children when the war reaches its peak.]

There were many countries coping with civil wars in 2009. And there are still wars in many countries around the world. Take South Korea for example, it still stands against North Korea. I thought many people could sympathize with the story.

After watching you for two and a half hours, I was surprised at how long it took to rehearse a single scene. Is that common in the theater or is that just your style?

Compared to other directors, I’m very tenacious. [Theater people] joke that I’m the pickiest and most tenacious director in Japan and the second most in the world. [Laughs.]

You’ve said in interviews that Korean-Japanese have led hard lives. Is that why you changed your name and nationality to Korean?

I did that in high school. I had happened to read the works of Korean poet Kim Ji-ha, and I also studied Korean history. And then I realized I had Korean in my blood.

The Japanese love Korean actors and actresses and they also love listening to K-pop, but I think they see Korea as a foreign country. For this reason, Korean-Japanese people are still excluded. I think they don’t understand or appreciate our lives.

Your stories are always about people at the bottom of society. Have you ever considered writing about another group?

I once received a proposal from a Japanese network to write a series about a wealthy family that owns yachts and vacation homes, but I turned it down. That’s a world that I can never understand. [Laughs.]

Is there a message you want to express through your plays?

I want people to know that it’s very tough out there, but the world is worth living in. And there are things we can share together.

Your plays seem to be a perfect mixture of tragedy and comedy. The comic scenes are so funny that people often laugh until they cry, but the dramatic scenes also elicit tears. What do you think makes your stories so powerful?

Most Japanese try to hide their innermost feelings but people in Kansai, where I was born and raised, laugh freely and vent their anger just as easily. If you go to Osaka, a region in Kansai, it’s always loud and bustling like Busan in Korea.

In an interview with us in March, you told us that ‘Japanese-Koreans are part of both Korean and Japanese communities but at the same time are part of neither.’ Do you still feel that way?

It must be hard for ordinary people to understand Korean-Japanese people. My opinion won’t change, but this uncertainty helps me when I write and direct.

What are your plans for the immediate future?

I’m working on a new play that will be produced in Japan in March. There will be another play at Namsan Arts Center in June and another next year at LG Arts Center. Its makes me feel good that I have more work in Korea than before.