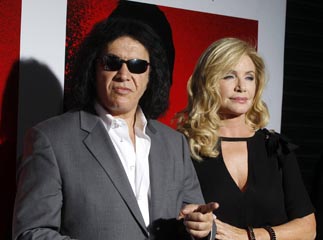 LOS ANGELES - Gene Simmons, frontman of the band Kiss, and his girlfriend of 28 years, the actress and former Playmate Shannon Tweed, were married this weekend before 400 guests.

The outdoor evening ceremony on Saturday at the Beverly Hills Hotel is the latest celebrity nuptials to have a second life as a television event.

It is scheduled for an Oct. 18 episode as part of the new season of A&E’s “Gene Simmons Family Jewels,” a reality series that has chronicled the pair’s unconventional relationship since 2006.

Tweed, 54, walked down the aisle in an ivory Priscilla of Boston gown and, according to TMZ, wore $2.5 million of diamonds - in addition to her engagement ring - for the first dance of the evening.

The couple’s daughter, Sophie, 19, served as maid of honor and son Nick, 22, created the illustration for the wedding invitation.

Simmons plays bass guitar and sings in Kiss, which had hits with the songs “Detroit Rock City” and “Rock and Roll All Night.”