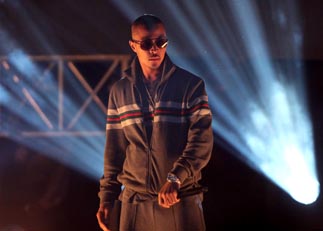 ATLANTA - Rapper T.I. has joined country star Taylor Swift in a surprise duet at her concert in Atlanta.

Toward the end of Swift’s set on Sunday night, she introduced T.I. by singing the opening chorus of his hit song “Live Your Life.’’ The packed house at Philips Arena screamed once he stepped onstage for the unannounced appearance and started to rap.

The two Grammy winners stood side-by-side as he rapped and she sang a vocal part originally handled by Rihanna. Swift has featured guests ranging from Justin Bieber to Nicki Minaj onstage during her tour. The Sunday show was a makeup performance for a July date that was postponed because she was sick.

T.I. has made several appearances onstage since his release from a halfway house last month following 10 months in federal prison on a probation violation.