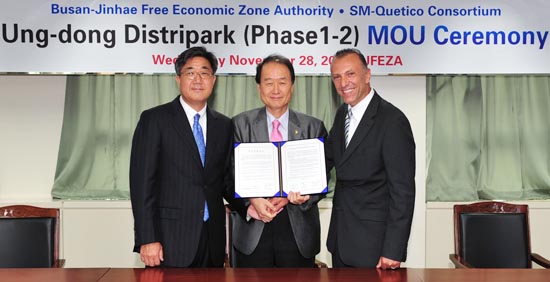 Officials of S.Q Consortium and Ha Myeng-keun (middle) commissioner of BJFEZ Authority pose for a photo at the MOU ceremony. Provided by the authority

Worth $25 million, the SM Global and Quetico LLC will build a 66,116-square meter (16.3-acre) logistics base for the Asian area in the Ungdong District of the BJFEZ.

Costco headquarters has recently started expanding their presence in the Asian market and has announced that is will increase the number of outlets in Japan, Korea, Taiwan and China. This announcement is very meaningful because right after this announcement it was also announced that the first Asian logistics base center of S.Q Consortium will open in Korea.

In the case of Japan and Taiwan, the final products are imported from America. With this MOU, S.Q Consortium will be importing raw materials from the U.S. and after wrapping, labeling and packaging at the new port logistics center, they will be shipped to 11 outlets in Japan and six in Taiwan. It will create new container traffic and also contribute greatly to achieving foreign currency. Through packaging and labeling, about 150 new jobs will be created and that will help increase the income of neighboring businesses as well as help the economy of the region.