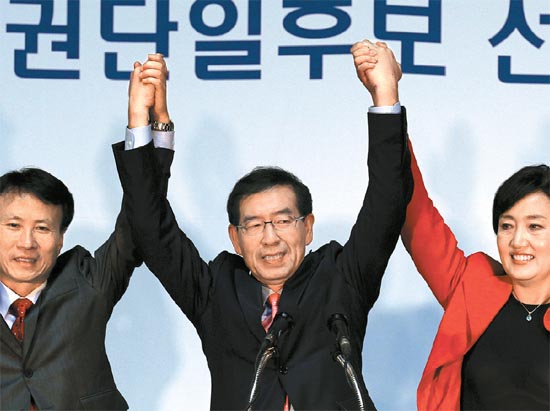 Park’s victory marked a success in a new political experiment by the liberals, as voters turned their backs on conventional politicians and endorsed an independent candidate without the backing of any political party.

After his victory, the 55-year-old candidate promised to cooperate with the Democratic and Democratic Labor parties as well as minor progressive parties and civic groups to win the election against the conservative Grand National Party. He also thanked the liberal voters’ new darling, software mogul Ahn Cheol-soo, for backing him.

“I won this primary without any negative campaign,” Park said. “I am proud to endure the attacks of the GNP and the Blue House.

The three candidates were scored in three different ways: through a public opinion poll (counting for 30 percent of their scores), an evaluation of a TV debate that took place Friday (30 percent) and a vote by an electoral college (40 percent). The opinion poll was taken on Saturday and Sunday, while the vote by 30,000 voters took place yesterday.

In terms of total scores in the primary, Park won 52.15 percent, while the DP’s Park Young-sun won 45.57 percent. Choi came in a distant third with 2.28 percent.

Although Park was behind the DP’s Park Young-sun in the electoral college voting at Jamsil stadium, hisvictories in the public opinion poll and TV debate anchored his win. In the stadium voting, Park won 8,279 votes, or 46.31 percent, while Park Young-sun won 9,132 votes or 51.08 percent.

Park won the first round when he was judged the winner of the Friday debate by 54.43 percent of its evaluators, compared to Park Young-sun’s 44.09 percent. Choi scored only 1.48 percent.

Because the election law bars candidates to give stump speeches except at a political party’s event, the three candidates exchanged greetings with voters outside the stadium, but did not make public appeals on the advice of the National Election Commission.

A big factor in yesterday’s vote by the electoral college was which candidate would get more supporters coming to the stadium. Out of 60,384 voters who registered, 30,000 were given seats in a random selection, but no one knew how many would actually show up to vote.

The independent Park fought against the strong organizational power of the Democratic Party after it mobilized members to participate in yesterday’s voting. At a general lawmakers’ assembly at 8 a.m., DP Chairman Sohn Hak-kyu encouraged the lawmakers to make phone calls to the voters in their districts to encourage voting.

“We had expected what’s coming, but we really felt a sense of crisis as we saw the massive mobilization,” said a member of Park Won-soon’s campaign said.

After supporters of Park Won-soon used social network services to urge young voters to come to the stadium to cast ballots, the turnout climbed in the afternoon.

“I rushed to come here because Seoul National University Professor Cho Kuk wrote that the young voters’ turnout was low,” Kim Jin-man, a 21-year-old university student, said at the stadium. “But I am surprised to see many young voters here.”

Park’s supporters, including liberal celebrities such as Cho and author Gong Ji-young, posted photos of themselves at the stadium online to encourage young voters’ participation. Around 11 a.m., only 4,593 of 30,000 eligible voters showed up to cast ballots, but the number jumped to 10,000 at 2 p.m. By 5 p.m., more than 50 percent of the eligible voters had voted.

The pattern was a reminder of the dramatic presidential victory of Roh Moo-hyun in 2002. At the time, young voters poured into the polling stations after 2 p.m., and Roh won against Grand National front-runner Lee Hoi-chang.

A similar pattern of turnouts was seen in local elections of June 2010 and by-elections held last April 27.