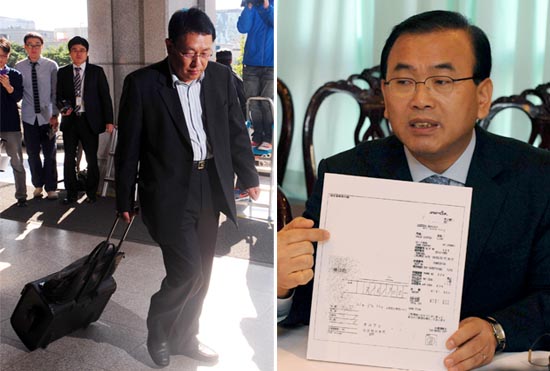 
A former key aide to President Lee Myung-bak yesterday held a press conference to refute a corruption allegation by a convicted businessman, producing evidence to disprove the graft claims.

“I have not received any entertainment paid for by the SLS Group,” Park Young-june, former vice minister of knowledge economy, said yesterday at the press conference.

Lee Kuk-chul, chairman of the midsized company SLS Group, who was convicted last year of fraud and lobbying, told the media last month that, for 10 years, he gave money regularly to top members of the Lee administration.

Park was among four presidential aides allegedly bribed by Lee. Lee claimed that during a trip to Japan in 2009, when Park was working for the Prime Minister’s Office, SLS’s Japan office paid for an expensive evening at a bar for Park. Lee said the amount was at least 4 to 5 million won ($3,396 to $4,254).

While admitting that he had drinks with an SLS executive in a bar in Tokyo on May 22, 2009, Park said yesterday that a friend of his named Kang paid the bill, and he produced a receipt.

According to Park, Kang, another public servant and the SLS executive drank at a bar in Tokyo after Park’s official schedule with the prime minister ended.

“I saw with my own eyes that my friend was paying, and I recently obtained the record,” Park said. “My friend was a former executive of Korean Air, and he was working for Hanjin International Japan at the time.”

Park added that Kang had already presented the evidence to the prosecution to disprove Lee’s accusation.

Asked why the SLS executive joined the Tokyo meeting, Park said he was introduced to him by another public servant that night. Park denied having any additional contacts with the executive.

“And I have also never met Chairman Lee Kuk-chul,” Park said. “He is a total stranger, and I have never even spoken to him on the phone.”

He also criticized the opposition parties for using Lee’s claims to attack him. “They made about 90 accusations against me, but nothing was confirmed,” Park said. “I hope they refrain from making groundless claims.”

SLS Chairman Lee appeared at the prosecution yesterday to submit to an investigation. He was first questioned on Sept. 23.

Lee arrived with a suitcase and a briefcase, presumably containing records of his bribes to top government officials.

In addition to Park, Lee claimed that he had provided more than 1 billion won worth of gifts and money to Shin Jae-min, former vice minister of culture, sports and tourism, over the past decade, since Shin was a journalist. Lee also claimed that he had provided gift certificates to Kwak Seung-jun, chairman of the Presidential Council for Future and Vision, and Lim Jae-hyeon, Blue House secretary for policy promotion, through Shin.

Park, Kwak and Lim have all filed defamations cases against Lee.

Known as a close adviser to both President Lee and his elder brother, Representative Lee Sang-deuk, Park has faced a series of allegations throughout the Lee administration. He was the alleged mastermind of the “Yeongpo-gate” surveillance scandal, in which the Prime Minister’s Office’s ethics team was involved in illegal surveillance of a businessman critical of the president.

Since the launch of the Lee administration, Park served in key posts. He worked as a strategy secretary for the Blue House from February to June 2008. He was vice minister for government policy at the Prime Minister’s Office from January 2009 to August 2010 and served as the vice minister of knowledge economy from August 2010 to May 2011. He resigned from the post to run in next year’s legislative elections.