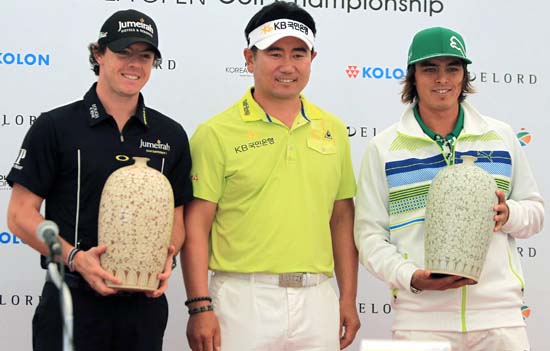 
Golf fans will have a chance to see reigning U.S. Open champion Rory McIlroy and world No.1 female golfer Yani Tseng take on Korean golfers. Both are set to tee off at the Korea Open and LPGA Hana Bank Championship this week.

McIlroy, 22, arrived in Seoul yesterday to play in the 54th Korea Open, which will be held from Thursday to Sunday at Woojeong Hills Country Club in Cheonan, South Chungcheong.

The Northern Irish man won this year’s U.S. Open in June after finishing with a 16-under 268, the lowest score in the competition’s history. He tied for third at the 2009 Korea Open, but missed last year’s event.

McIlroy is expected to be challenged by Yang Yong-eun, who tied for third in this year’s U.S. Open and is the defending champion of the Korea Open.

Yang, also the 2009 PGA Championship winner, said that he is ready to face McIlory and make things exciting for home fans. Last year, the 39-year-old Korean overcame a 10-shot final round deficit against Noh Seung-yul to claim his second title.

“If I meet McIlroy in the final group, I will present more fabulous shots,” Yang said yesterday at the press conference.

Two top contenders will join American Rickie Fowler, the 2010 PGA Tour’s Rookie of the Year, and Kim Kyung-tae, currently the top prize money earner in the KPGA, to try and claim the winner’s prize of 300 million won ($254,000).

While McIlroy and Yang highlight the field of men’s golf this week, Korean women golfers will try to mark their 100th LPGA win on their home soil against the world’s top ranked golfers, including Yani Tseng.

Since Ku Ok-hee first marked an LPGA win at the 1988 Standard Register Turquioise Classic in Phoenix, Korean and Korean-American golfers have so far compiled 99 wins. They will aim to celebrate their 100th win on Friday at the Ocean Course of the Sky72 Golf Club in Incheon.

Entering its 10th year, the championship is the only LPGA Tour event that is held in Korea.

Two-time defending champion Choi Na-yeon, U.S. Women’s Open champion Ryu So-yeon and Shin Ji-yai, a former No. 1 player who is returning from a month-long back injury, are all considered first-place contenders, but experts are saying they will need to overcome tournament favorite Tseng to claim the title.

The 22-year-old from Taiwan has won five times this year, including two of the LPGA’s four major tournaments - the LPGA Championship and British Women’s Open.