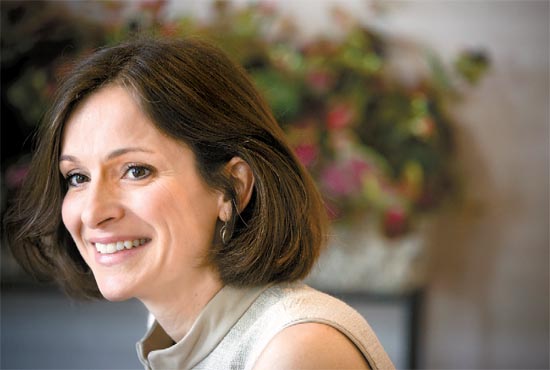 Sarah Thornton, a Canadian writer and sociologist based in London, visited Korea last month to promote her new book “Seven Days in the Art World.” The Korean translation of her book was published locally last month. By Kwon Hyeok-jae


Contemporary art can sometimes seem as inscrutable as it is enjoyable, but Sarah Thornton’s new book on the subject provides an insider’s perspective on the art world that goes a long way toward clearing things up.

Thornton, a Canadian writer and sociologist based in London, whose previous book was about Britain’s rave subculture, spent more than two years inside the art world to uncover its inner workings. She condenses this work into “Seven Days in the Art World,” the book’s title, and breaks her investigation into seven categories: the auction, the art fair, the art prize, the critics, the studio and the biennale. The material is based on her interviews with artists, dealers, collectors and others in the art world. The book, originally released in 2008, was translated into Korean and published here by Minumsa Publishing Group last month.

Thornton was in town last month to promote the book with a speaking engagement at the “Korea Tomorrow” exhibition, which closed Sunday at the Hangaram Art Museum in southern Seoul. Prior to her arrival, she was in Athens, Istanbul and Tokyo studying the influence of contemporary art in those countries.

While she was here, she sat down with the Korea JoongAng Daily to talk about what needs to be fixed in the art world and the status of the Asian market.


Q. You wrote in your book that art is getting more attention because it’s expensive. Is that true? 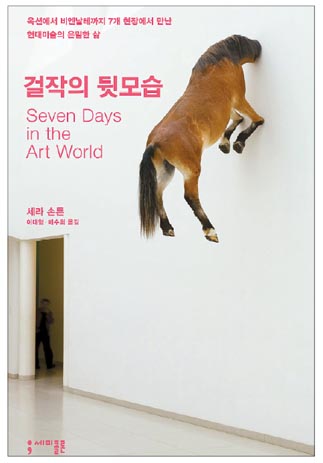 The Korean translation of “Seven Days in the Art World”

A. That is one reason why some people are interested in art. People who think they only like old masters might all of a sudden start paying attention to contemporary art because a Warhol sells for $70 million. So there are businessmen who respect money, who are intrigued by art, because of its art market. Different people enter art and take an interest in art through different avenues. So the high prices commanded by contemporary art is part of the way the message of contemporary art gets spread.

Some say that contemporary art doesn’t seem to require much artistic skill and that concept is the only thing left in art. Is a conceptual work still a work of art?

This is a really interesting question to me and it’s a really important one to the difference between insider and outsider thinking. I think that the general public, especially older people, confuses craft with art. With conceptual art and Marcel Duchamp we have gone through an industrial revolution in art in which the artist is liberated from manual labor and they are now an ideas person. And this is a generational thing. So younger people tend to appreciate art in this way. The older generation likes Rembrandt, or the Korean equivalent, or traditional calligraphy or the traditional ink arts. But all art forms have their conventions, and their innovation within the convention. I think perhaps, even within contemporary and conceptual art, there is a renewed interest in careful craftsmanship. But it doesn’t have to be by the artist’s own hand. You just hope that the artist oversees carefully the execution of the work because the execution is really important.

But doesn’t that prove that the work is not done entirely by the artists themselves?

Even in the studios of great, old masters, you would have a team of assistants. So when Rubens was doing a huge mural, he was not painting everything on the mural. He was doing the face, and he had an assistant who did the feet and the flowers in the corner. There is a long history of artists working with assistance. In general, sculptures are always fabricated by other people. Like Rodin, when he’s making bronze, he’s not sweating over the coals or Michelangelo would design a sculpture perhaps, but not chisel every bit of marble. So some of the greatest works of all time are not entirely by the hand of the artist whose name we attach to them. It’s just there’s a tendency in art history to isolate the artist and exclude all the other people who are important to the work.

It seems unfair to give all the credit to the one artist who came up with an idea. In film, even though the concept comes from the director, there are credits at the end to acknowledge the hard work of the rest of the staff. But it seems like the art world is different.

This is something I want to remedy, so I included curators, dealers, critics and all the people who support the artists.

In the Takashi Murakami chapter, [Chapter 6], one of the things I actually like about [painter and sculptor] Murakami is that he includes the names of everybody on the back of a painting. And I write about that. He’s fairly unique because some artists contribute to the invisibility of their assistance. But he helps his artists emerge. So not only do they all sign the back of the painting, but he helps them launch their own art careers.

Let’s talk about a bit more about the Asian market. What’s happening in the Asian art world?

Beijing and Seoul will definitely make an appearance in my next book. I think in each country in Asia you have a very different taste. You have very different historical relationships with art. I’d say probably Korea is the most advanced, has had the most interaction with the Western art world.

Probably because of the American influence? I mean, a lot of Korean artists have studied abroad in New York, Los Angeles. And Koreans were early in buying international art. In a way, if you look at the history of the highest prices at the auctions, there was a moment when Koreans were paying the highest prices. But now it’s the Chinese, Russians and Arabs who are paying the highest. Koreans came into the market before the Russians and were buying contemporary art. There’s not really a strong contemporary market in Japan at all. When the Japanese were dominant was in the late ’80s, they were buying impressionists to modernists, but not contemporary. The Taiwanese have a very sophisticated collecting culture, but they tend to collect traditional. Also, I think it’s partly because the affluent and royal families fled China during the revolution, and they love old things.

Do you think it’s a problem that people don’t seem to care much for contemporary art?

Historically that was an issue in Britain. Britain was very much behind Germany in its embrace of contemporary art. And that’s because of the old class system where they like to have medieval armor rather than a contemporary work of art. I think societies with more social mobility that are less class ridden are more likely to embrace contemporary art, because it’s a symbol for the new money and entrepreneurial endeavor. It’s not really associated with old monarchies.

Which Asian country is the most isolated from the art world?

Well, you’ve got to distinguish between the artists and the collectors. The Japanese market is isolated. There are a few collectors of contemporary art in Japan, but not very many compared to Korea. This is a big problem for Japanese artists because they don’t have the support of their homeland. Iranian artists do amazingly well, and it’s not because of people living in Iran. It’s the millions of Persians who live abroad who support Iranian artists. They buy Iranians’ work, so that gives artists a good basis. That’s a problem for Japanese artists. There are not many Japanese collectors to support them. The home base is weak, which I don’t think the case for Korea. I think the home base of collectors’ support for Korean artists is much stronger.

What advice would you give to someone with little knowledge of contemporary art who wants to invest in art?

There is an age thing, so if you buy works from young and emerging artists, you can get them for cheaper and they become validated [later]. You should never make the mistake of confusing high price with high quality. There’s a lot of good art out there that does not have a big market. And the big market is the thing that makes the art expensive.

Can one learn to predict the next big thing in the art world?

That does take education. I think you have to go to a lot of museums and look at a lot of art and read books to educate your eye. I think sometimes people with less experience in art are going to go for the things that are the most accessible, which is not necessarily the most sophisticated and deepest work. If you want to invest in art, maybe it would be good to spend a whole year looking and not buying.