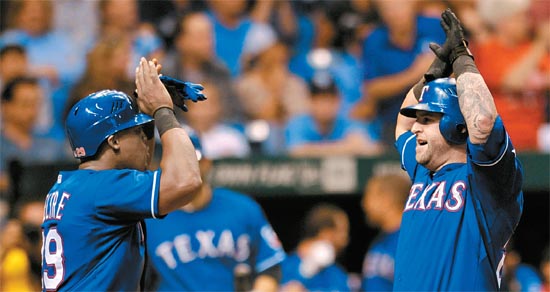 
ST. PETERSBURG, Florida - Mike Napoli ignited a four-run seventh inning with a two-run homer as the Texas Rangers held on to beat the Tampa Bay Rays 4-3 in game three of their first round MLB playoff series.

Pitcher Colby Lewis struck out six batters and walked just two for the Rangers, who have a 2-1 lead in the best-of-five American League series.

In the late game, Delmon Young hit a tie-breaking home run in the seventh inning off Rafael Soriano to help the Detroit Tigers take a 5-4 win over New York on Monday.

The defending AL champion, the Rangers can wrap up the series with a win in game four on Tuesday.

Josh Hamilton also singled in two runs in the seventh for Texas who survived a shaky night from their bullpen at Tropicana Field.

In Detroit, Justin Verlander struck out 11 in eight innings and closing pitcher Jose Valverde stopped a Yankees’ late rally for the second straight night as the Tigers seized a 2-1 series lead over New York.

Valverde struck out Yankees star Derek Jeter with two men on base to end the game in the ninth inning and push New York to the brink of elimination from the playoffs.