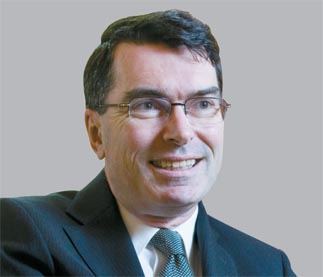 British Ambassador to Korea Martin Uden has served in the country for a total of more than 10 years including stints as second secretary from September 1978 to December 1981 and as political counselor from July 1994 to July 1997.

His ambassadorship began in February 2008 and wraps up in two months.

Fluent in Korean, Uden runs a bilingual blog documenting his activities as ambassador and showing his appreciation of Korea. Eight years ago, he published a book in the United Kingdom titled “Times Past in Korea.”

But one of the reasons why the country is so special to him is because it is where he met his wife, Fiona. She came to Seoul in 1981 as a member of a British dance troupe and, after the two became acquainted, he proposed to her in January of the following year.

When the JoongAng Sunday met him for a farewell interview at the embassy on Sept. 26, he had just celebrated his 29th wedding anniversary. He and his wife both described Seoul as their “dream posting.”


Q. What is unique or different about the Korean character?

A. One thing I would stress is that although I know something about Korea, it doesn’t make me an expert on the entire Far East. But one thing I find, and I have spoken about it to many businessmen, is how approachable Koreans are. It’s easy to get to know Korean businessmen on your first meeting, in contrast, really, with Japanese or Chinese businessmen, with whom it often takes a long time to establish a relationship. Many Western businessmen find that Korean people are much easier to get to know.

I find that during the first meeting with businessmen or government officials, they are very prepared to get down to business quite quickly. They also are prepared to share jokes and have a rather informal attitude, in a way that really does not exist in Japan and China, and I think that’s why people find this is a place they can come to do business in.

What do you think is behind Korea’s fast development?

I think you can give a lot of credit to very clear-sighted leadership from President Park [Chung Hee] in terms of how the country developed. I am not saying it was the best. You may not like the leadership. He had a vision, he had a plan, as it were, and the well-educated, homogenous nature of Korean society meant that everybody could respond and move in the same direction. From 1961 to 1979, there was no question about development that was made.

Let’s not forget that you had a lot of economic credit, but democratic deficits.

I am not saying it was just President Park. After all, even after he was assassinated, the country still progressed enormously. I still say the government takes a fair bit of credit.

You visited North Korea once or twice a year while you served as ambassador here. How do you feel when you go there?

I feel the same every time I go, which is just sadness that fundamentally the same people have not had the opportunity to share the progress and affluence that exists here in the South. You know I am quite sure if people in Pyongyang would be given the same opportunity as the people in the South, they would react just the same way. They would be able to build a free, open society, but they just don’t have the chance and I am incredibly sad.

Do you have any embarrassing memories in Korea?

There was one moment I remember I was a bit embarrassed in this residence in the 1990s. Edward Heath was visiting here - he used to be prime minister in the U.K. [between 1970 and 1974] - and we put together a very small dinner with [former President] Kim Dae-jung. It was a small dinner, maybe eight to 10 of us at the table. We thought to get these two great men together, Kim Dae-jung and Edward Heath, and we wanted to see what they would talk about. The embarrassing thing was that Edward Heath had no interest in Kim Dae-jung. I thought it was so sad. For me, Kim Dae-jung is such a hero, to be honest. A Nobel Prize winner, a man who struggled for democracy, whether you agree with his “Sunshine Policy” [of rapprochement with the North] or not, and nonetheless, a man of tremendous principle and vision. Edward Heath just wasn’t interested.

How can the Korean economy develop further?

It is interesting to look at how some aspects of the Korean economy have been fantastically successful, but when it comes to services, really the country is not as successful.

One has to ask why that is. I am afraid in some way it is a matter of regulation and competition because the manufacturing industry, in order to export, has to become internationally competitive. It has to be developed as one of the best in the world. But when it comes to services that can remain protected in Korea, they don’t need to be developed in the same way.

So some of Korea’s financial services, retail services and even telecommunications services ... haven’t really developed internationally in the same way that the manufacturing industries have. I really feel that the key for Korea to develop its services market is actually to ensure proper competition, which includes bringing in outside competitors.

Is there any more advice you wish to give to Korea?

Korea needs to show leadership both internally and, I think, internationally. Korea could be doing a lot more internationally. It has such a good story to tell on the economy, [and] on democratic development, but I really feel the world will be a better place with a more assertive Korea on the diplomatic stage.