Pororo’s creators going to court over his birth

Pororo’s creators going to court over his birth 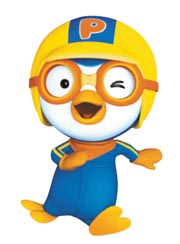 Pororo, the blue cartoon penguin loved by children around the world, is now the subject of a bitter paternity battle.

Ocon Animation Studio, which was responsible for the design and animation of Pororo, is bitter that its marketing partner, Iconix Entertainment, keeps claiming to be the creator of the popular character, and it will file a lawsuit.

Iconix says it has never misrepresented its role in Pororo’s creation and threatened a countersuit if Ocon damages its reputation.

The saga began in May 2002, when the two companies formed a partnership in which Ocon designed Pororo and his friends and produced the animation, while Iconix marketed the series. In 2003, the first 52-episode season of “Pororo the Little Penguin” was aired on the Education Broadcasting System (EBS) and became one of the most popular animation series in the country. The two companies pulled in EBS and SK Broadband, a high speed Internet service provider, as business partners and have extended their franchise internationally through merchandise such as books and clothing.

Things started to get rocky between Ocon and Iconix in 2005 when the Korea Creative Content Agency, a government agency, held a competition for the best animated characters.

According to Kim Il-ho, 44, CEO of Ocon Studio, Iconix Chairman Choi Jong-il entered Pororo in the competition without notifying Ocon or listing them as creators of the character. Pororo won first prize in the contest.

“It was very clear that Iconix intentionally omitted our name when it applied to the contest,” Kim told the JoongAng Ilbo. “We complained several times, but what we heard from Iconix was, ‘There wasn’t enough space on the application form,’ or ‘It was a mistake by some of our staff,’ which doesn’t make any sense in a business like this.”

Kim said that he decided to sue his partner after hearing about an upcoming episode of MBC’s popular TV talk show “Knee-drop Guru” on which Iconix CEO Choi is introduced as the father of Pororo.

Kim said Iconix has frequently described itself as Pororo’s creator and has excluded Ocon from certain Pororo businesses, including book publishing and clothing lines.

“Everyone knows that Ocon created Pororo and we are the exclusive copyright holder,” Kim said.

However Choi told the JoongAng Ilbo that the Ocon’s insistence on an exclusive copyright to Pororo is wrong and that the copyright is shared by the four partners in the Pororo empire. He also said he never intentionally excluded Ocon from any business activities, and the reason he appeared alone on the MBC talk show was because he was the only one invited.

Choi said that Kim is envious of Iconix for getting media attention.