To Sunday: The solo show by provocative Chinese artists Sun Yuan and Peng Yu, who are also a couple, features a real boy kicking a football around as if out on the pitch instead of inside a gallery and hyperrealistic sculptures of a group of well-dressed adults whose heads have been replaced by huge misshapen stones.

Their heads are so big “to reinforce the strangeness,” Sun, who is here with Peng, said. “We wanted to make them even bigger. But the galley space was limited.” According to curator Gu Zenqing, the work is open to interpretation. Arario said in a press release that the piece was created to “confront the influx of commercial culture, while offering rare insight into individual freedom.”

THIS IS NOT GRAFFITI 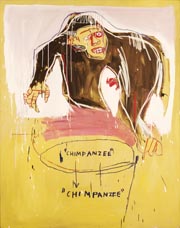 To Oct. 22: Graffiti art has evolved, its style changing and adapting to various regions of the world since it became a common sight in Harlem in the late 1960s and early 70s.

The exhibition displays more than 30 pieces including humorous works by French-American artist Mr. Brainwash, works inspired from comics by the New-York-based “Godfather of Graffiti” SEEN, and collages of flamboyant colors by London-based artist Vincent Poole.

The also includes works by Jean-Michel Basquiat and Keith Haring.

In the German artist’s first solo show in Asia, he shows 16 paintings depicting scenes that are common in daily life. But because of details and backgrounds that have been intentionally omitted or simplified by the artist, the images remain ambiguous and sometimes even mysterious.

Several of the paintings depict homeless people or their traces, such as an empty cot on the street, conveying a deep sense of loss, isolation and loneliness.

The show features 230 drawings, including concept sketches and installation portfolios.

The drawings in the exhibition can be categorized into three types: drawings on the themes of identity, ego, multiculturalism and social issues; concept drawings; and an installation portfolio that Bahc repeatedly modified for production and installation of his works.

To Oct. 30: In this exhibition, the works of 23 artists who were selected as Artists of the Year will be displayed along with a video containing a message from each artist. The Artist of the Year initiative, which was established in 1995, identifies artists who show a strong creative drive and perform distinguished art activities in the Korean art world and the selected artists are invited to hold solo exhibitions at the museum. 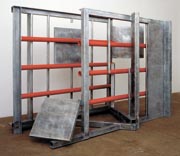 To Oct. 30: In this solo show by the renowned British sculptor, the juxtaposition of his signature weighty works with newer, smaller pieces, illustrates the tireless development of the 87-year-old artist’s oeuvre. Caro is best known for pushing the limits of sculpture by unifying his installation with the surrounding space and architecture rather than focusing solely on the sculpture itself.

The exhibition highlights Caro’s ability to redefine his materials - industrial metal, wood and stone - and includes table pieces made just for the exhibition and six relief works from 2010.