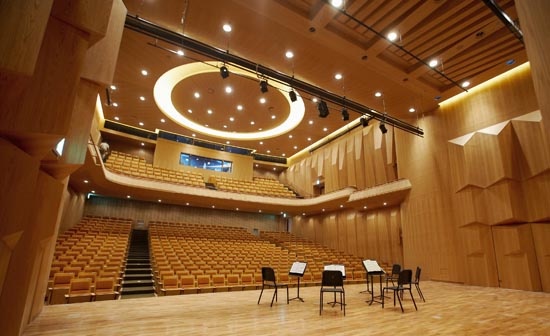 The new IBK Chamber Hall, which has a capacity of 600, was created with state-of-the art acoustics to give audiences a better concert-going experience.

“The purpose [of constructing a new venue] is to deliver exactly what can be heard on stage to the audience,” said Kim Nam-don who was in charge of designing and constructing the building, according to a press release from Seoul Arts Center.

To celebrate its new venue, Seoul Arts Center will present 48 concerts in an event called “IBK Chamber Hall Opening Festival.” The festival opens today with a concert by soprano Shin Youngok and the Prime Philharmonic Orchestra and continues through Dec. 13.

The Classic Star Series features well-known musical artists such as soprano Shin Youngok, who made her operatic debut with the Metropolitan Opera in 1990.

The Young Classic Star Series will start this Sunday with a recital by pianist Son Yeol-eum, who won second place in the Tchaikovsky Competition with her performance last June.

The following concerts in the series feature violinist Clara-Jumi Kang on Oct. 13 and bassist Minje Sung on Oct. 31.

Son Beom-su and Jin Yang-hye’s Talk and Concert, which was previously presented at the SAC Recital Hall, will present cellist Chung Myung-hwa in concert on Oct. 15. The program includes Mendelssohn’s Cello Sonata No. 2 in D, Op. 58.

The Ensemble Festival features the New York-based Emerson String Quartet in a concert on Dec. 11.

*The IBK Chamber Hall Opening Festival runs through Dec. 13 at the IBK Chamber Hall. Today’s opening concert starts at 8 p.m. Tickets for today’s performance range from 50,000 won ($42) to 70,000 won. Other concert times and ticket prices vary. For more information on concerts during the festival, call (02) 580-1300, or visit www.sac.or.kr.