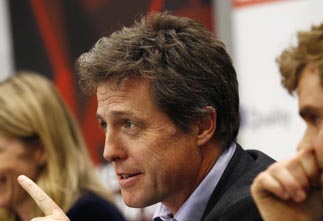 MANCHESTER - Actor Hugh Grant said Britain’s leader has told him he will support reforms of the country’s scandal-hungry media in the wake of the tabloid phone-hacking scandal.

Grant, who suspects that his own cellphone voice mail messages were intercepted by journalists, has campaigned for tighter regulation of Britain’s news industry. He met Prime Minister David Cameron at the governing Conservative Party’s annual convention Tuesday while attending a fringe event on phone hacking.

Lord Justice Brian Leveson has said Grant is among a group of 46 people - along with Harry Potter creator J.K. Rowling, actress Sienna Miller, Formula One boss Max Mosley and the parents of both missing girl Madeleine McCann and murdered schoolgirl Milly Dowler - who will participate in hearings on alleged media intrusion into their private lives.

The hearings will examine media ethics and likely suggest a new regulatory regime to replace the Press Complaints Commission.

The commission - Britain’s current watchdog for the written media - is industry funded and can demand a newspaper publishes an apology, but has no power to issue fines.

Grant told a meeting on the sidelines of the Conservative Party’s annual rally Tuesday that Cameron has suggested he would take up Leveson’s findings.