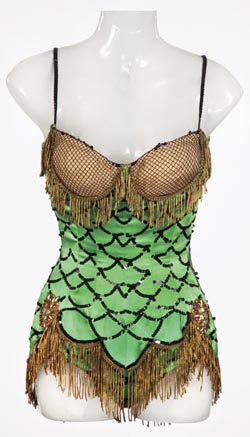 LOS ANGELES - A selection of Marilyn Monroe’s costumes from films such as “Gentlemen Prefer Blondes” and “Bus Stop” are going up for sale in December, following sales of $22.8 million from an auction held earlier this year in Beverly Hills.

The Debbie Reynolds Collection auction in June far exceeded its initial estimates, and earned a place in the Guinness World Records after selling Monroe’s iconic white “Subway Dress” for $5.52 million, making it the world’s most expensive dress.

Fans and collectors of Monroe will have another chance of owning costumes worn by the late actress, priced between $150,000 and $300,000 at the Debbie Reynolds Collection Part II auction.

The screen legend’s gowns from “Gentlemen Prefer Blondes,” the 1953 thriller “Niagara” and the 1960 Oscar-nominated comedy “Let’s Make Love,” will also be up for auction.

Reynolds, 79, began amassing the impressive collection when she was a young actress under contract at MGM. When the studio auctioned off everything except its real estate in 1970, she turned a pastime into what she called an “obsession.”

But her dream of displaying her beloved costumes in a museum was dashed several times and she was forced to sell them to pay back creditors.

Monroe’s four costumes will be auctioned in Beverly Hills as part of the Debbie Reynolds Collection Part II on Dec. 3.