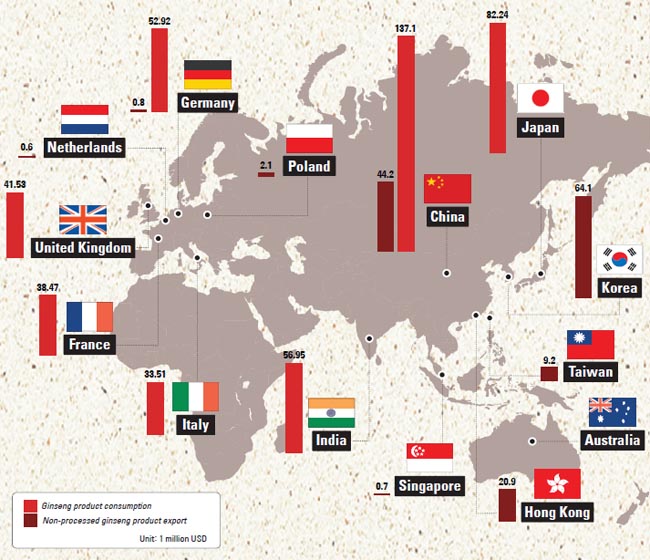 Jeong Yun-nam swears by ginseng. According to this farmer in Daejeon, the health properties of the perennial plant that abounds in this region is the reason his family never gets sick.

“I make red ginseng from the plants I cultivate here every year, he said. “I think this is why no one in our family has ever caught a cold.”

These are the kind of anecdotes - and boons of the Korean wonder plant - that organizers have been touting at the 2011 World Ginseng Expo, which wrapped up this week. The expo has received over 1.8 million visitors since it opened in early September in Geumsan, South Chungcheong.

As ginseng is cultivated this month and next, many festivals with a related flowery theme are ongoing or in the pipeline to give the local industry a boost.

The expo even has a farm at its doorstep offering hands-on experience in the cultivation of the plant, allowing out-of-towners to get their hands dirty and return home with a souvenir they have not just purchased, but harvested too.

Ginseng, a staple of Chinese and Korean medicine, is widely known for its health-promoting properties. As long ago as the fifth century, an ancient Chinese medical document by an author named Dohonggyeong classified it as a medicine useful in aiding blood circulation, boosting the respiratory system, restoring healthy skin and refreshing the body. It described ginseng as being safe for long-term administration without producing harmful side effects. 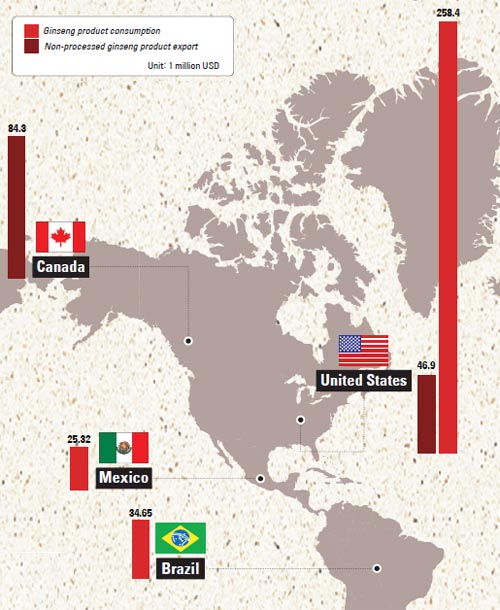 However, it is not easy to find a record of when exactly the medicinal properties of ginseng came to light. One account found in an another old Chinese document called “Geupqijang,” which is estimated to have been written about 2,000 years ago, introduces the Chinese character for ginseng for the first time.

While ginseng remains hugely popular in Korea as a tea, gift and even as a lunchtime side dish with samgyetang (chicken broth soup), its fortunes in the export market have dipped.

Korea - a world-leading producer and exporter of ginseng until the late 1970s - has seen its industry tank in the last few decades, partly in response to malicious rumors that local officials believe were deliberately concocted to mastermind its downfall.

Kim Young-man of the Ministry for Food, Agriculture, Forestry and Fisheries said the promulgation of this belief, among other measures, put a crimp on business.

“[Our losing competitiveness in the market] is the result of the marketing strategies of other countries that have been striving to expand their respective market shares,” said Kim, who serves on the ministry’s vegetation team. “No one ever investigated or verified that claim.”

As a result, sales now follow an annual pattern that leaves local farmers at a loss: demand builds through the year then wanes toward the end of summer as the mercury dips.

Meanwhile, U.S. ginseng, which is known to lower body heat, is exported to countries with higher average temperatures, such as in Southeast Asia, throughout the year.

Korea saw sales first take a hit in the early 1980s when the U.S. and Canada began paying more attention to domestic production of the plant and attempted to build global markets for themselves.

Canada, the more successful of the two, owned the highest share in the world market last year at around 30 percent, followed by Korea and the U.S.

Korean ginseng sales have fluctuated ever since, according to the food ministry. The country exported $165 million worth in 1990 but saw this plummet to $55 million in 2002.

As Hong Kong is the world’s No. 1 importer of ginseng - it imports around 45 percent of total world ginseng production - how each producer fares in the territory is of critical importance. Korea’s share of the Hong Kong market slid to 2.8 percent in 2005. After hitting rock bottom, it slowly climbed back up the ladder to claim a 26 percent share last year and regain its position as the No. 2 exporter to the territory.

But claims that rumors alone crippled the Korean industry are blinkered at best and overlook the country’s pricing system that leaves it at a distinct disadvantage.

The per-kilogram price of Korean ginseng is 1.9 times more costly than its U.S. counterpart and 6.9 times dearer than Chinese ginseng. This is largely due to the size of farms in Korea, which are considerably smaller and less mechanized than in those the three stated rival countries. Not that this matters much to large buyers, who are often put off by the high price tag regardless of the product’s quality and therefore refuse to circulate it.

Some point to the way Korea produces red ginseng as another factor in its decline, as manufacturers insist on using six-year-old ginseng for a fuller flavor and a more beneficial impact. This is then steamed or sun dried.

“About half of all ginseng that is raised for six years decays,” said a local industry official, who asked not to be not named. “Many studies indicate that the nourishing constituents are not much different between four- and six-year-old ginseng, and Korea is the only country that raises it for so long.”

As many people were looking to dig ginseng from the wild, making it rare and hard to find, ginseng cultivation is believed to have suddenly sprung into fashion to meet demand. But it is not clear when exactly in history cultivation kicked off.

Another gray area is the origin of the plant’s English name, which could possibly be rooted in the Chinese pronunciation, renschen, or the ancient Korean name for it, sim. 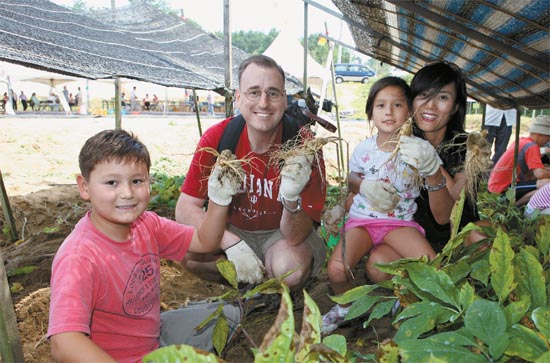 A family at the World Ginseng Expo digs through raw ginseng. [JoongAng Ilbo]


Although ginseng is indigenous to Korea and other Asian countries, Western countries are now powering ahead in terms of its production, with Canada currently ranking as the top producer.

Ever since Chinese-Canadian businessmen started growing the plant and exporting it to Hong Kong, the country’s sales have exploded at enormous speed. Its share of the Hong Kong market alone two years ago - also 30 percent - was worth $84 million.

One of the reasons behind Canada’s rapid growth is the time and money it has poured into researching ginseng and related products. Institutes such as the University of Toronto regularly work with businesses to improve the quality of the their ginseng.

“Canadian researchers recently produced a paper claiming that ginseng not only prevents people from catching colds but also helps cure them,” said Bang Gyeong-hwan of the Rural Development Administration.

The United States also jumped into the Hong Kong ginseng market with its own breed after the 1970s and lured buyers with quality guarantees.

Europe also has a share but not such a sizeable one. Swiss pharmaceutical company Pharmaton is the top manufacturer of ginseng products on the continent, selling about 40 million of its Ginsana capsules each year. 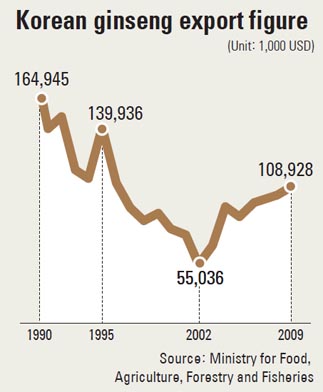 But it is China that perhaps poses the biggest threat to Korea right now. China has more land producing the plant than any other country and ranks as the fourth-largest exporter. What holds it back are the poor quality of its plants and processing techniques. But China is racing to catch up in these areas, as it follows a nationwide program of adding higher value to its manufacturing industry to combat rising domestic prices of raw materials and labor.

“It is scary how fast China is catching up,” Hyung said.

China has also begun to understand the virtues of luxury branding. It is embracing a new strategy of marketing its ginseng cultivated on or near Mount Baekdu, on the China-North Korean border, as the Gucci of the ginseng industry - an authentic and traditional Chinese product.

“It is not just encouraging national research on the plant but also trying to dig up historical accounts showing that Korean ginseng was once a special product of China, with Mount Baekdu as its home,” Hyung said.

Even Hong Kong, which is not a producer, is jumping on the bandwagon and playing a new role as an exporter of ginseng products, using its advantages as a strategic hub. It imports raw ginseng from Canada, Korea and the U.S. and then sends the manufactured products back to those same countries.

The Korean government has set a goal of quintupling ginseng exports to $500 million by 2015 by finding ways to lower prices and raise quality.

As such, it plans to support studies on developing superior breeds and provide enough technical support to slash labor costs - one of the main reasons why Korean ginseng prices tend to be higher than competitors’.

To boost research, the food ministry is launching a new award to honor scientists who make outstanding contributions to the industry and local farms.

The winner of the first World Ginseng Science Award by the Rural Development Administration of Korea will be announced tomorrow.