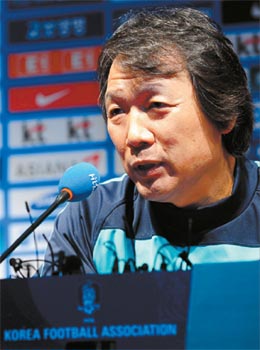 Both the Korean Olympic team and the senior national team will play friendly matches tonight at the same venue, presenting football fans with the rare excitement of a doubleheader.

At the Seoul World Cup Stadium, the Olympic team will open up with a match against Uzbekistan at 5:30 p.m., followed by the senior team which will face Poland at 8 p.m.

This is the first time in Korean football history that the Olympic team and senior team will play at the same stadium on the same day.

The Olympic team, led by coach Hong Myung-bo, is in the midst of the final round of Asian qualification for the 2012 London Olympics.

The Under-23 team won its opening match in Group A last month, beating Oman 2-0. Their next game is against Qatar on Nov. 23, but to keep up the team’s form and find replacements for regular members, Hong has decided to make a big effort against Uzbekistan.

“The match will provide a good experience to our new players,” Hong said at the National Football Center in Paju, Gyeonggi, yesterday.

For this friendly, the young Taeguk Warriors will be shorthanded after key players are either missing due to injury or have been called up to play for the senior team.

Midfielder Yoon Bitgaram, who scored a goal and got an assist against Oman, will feature for the senior national team with captain Hong Jeong-ho and left back Hong Chul.

Hong’s team is weakened as key midfielder Kim Bo-kyung is out due to a broken nose he suffered during the Asian Football Confederation (AFC) Champions League match last week.

Other regular members such as midfielders Jung Woo-young, Cho Young-cheol, Kim Min-woo and goalkeeper Ha Kang-jin are also absent from the squad at the request of their clubs. To fill the void of regular members, Hong has called up U-20 members such as Yun Il-rok, Baek Sung-dong, Kim Kyung-jung and Jang Hyun-soo.

Hong acknowledges that the team is not the best, but said they’re confident they can win against Uzbekistan, the top team in Group B. While the Olympic unit will figure out how to play without regular members, the senior national team is set to test its attacking tactics built around veteran striker Lee Dong-gook, who will wear the national uniform for first time since the 2010 World Cup.

National team coach Cho Kwang-rae said he will use the Jeonbuk Hyundai Motors striker on the frontline, with the English Premier League duo of Park Chu-young of Arsenal and Ji Dong-won of Sunderland playing on the flanks for the match against Poland. Lee, 32, is currently having his hottest season in the K-League, netting 16 goals with 15 assists in 27 matches. The former Middlesbrough player is the most experienced player in the squad with 85 caps for Korea so far.

“When Lee plays as the top striker, we will need wingers who can best support him,” Cho said. “Lee’s presence and attitude will help boost the atmosphere among the team.”

Another key change for the attack is Nam Tae-hee who plays for French club Valenciennes. The 20-year-old used to play on the wing for the national team, but for this match, he will move to the center to support Lee.

“There is not much difference for me to play on flanks or in the center” Nam said. “I will try to move around a lot and create more chances for Lee.”

For the full-back positions, which experts are saying is the weakest point of the national team, Cho is expected to start Kim Young-kwon as left-back, while Choi Hyo-jin is ready to fill in for injured Celtic right-back Cha Du-ri. Cho said the match against Poland will be a tune up for the third round Asian qualifiers of the 2014 World Cup next week.

The team is scheduled to face United Arab Emirates on Tuesday in Seoul.