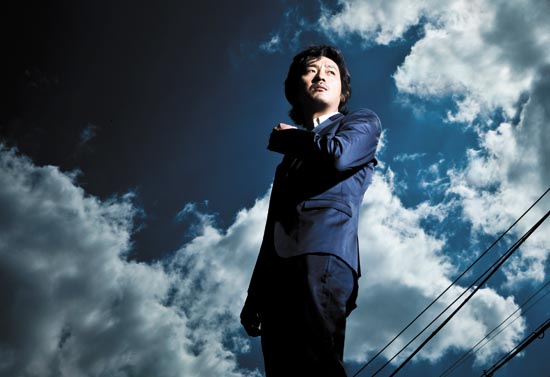 Actor Ha Jung-woo is back as a perfectionist lawyer defending a man accused of murder in the gripping courtroom drama “The Client.” By Kwon Hyuk-jae


He is no longer a serial killer (in “The Chaser”), nor is he an ethnic Korean living in China who is hired as an assassin (in “The Yellow Sea”) or an obscure ski jumper who competes in the Winter Olympics (in “Take Off”).

No, in his new film, “The Client,” actor Ha Jung-woo shows that the role of a buttoned-down professional is one that suits him well.

Ha plays Seong-hee, a lawyer who has won 99 percent of his cases and is now facing the challenge of defending a potentially innocent man accused of murdering his wife. And despite the seriousness of the plot, Ha manages to imbue the film with an air of lightness thanks to his excellent characterization of the brazen protagonist.

To prepare for his role, the first thing Ha did was suit up.

“It’s like after you’ve spent time wearing a military uniform for two years, it’s really awkward to wear ordinary clothes,” he said in a recent interview. “I couldn’t get rid of the grubby look I’d had for previous roles just like that. So I suited up even when I went out for a drink in my neighborhood with friends. They laughed, saying I must be crazy.”

Ha also shed 8 kilograms, or 17 pounds, to project a sleeker image and met with various law professionals to get a feel for the work.

“I compared judges to civil servants, prosecutors to detectives and lawyers to public defenders,” he said.

The real challenge came with the voice work, and he had to adjust his tone of voice when speaking to better capture his character’s authoritative demeanor. When the character makes his closing argument in defense of Han Cheol-min (Jang Hyuk), the client of the film’s title, Ha delivers a passionate final statement, saying, “It is better to release 10 guilty prisoners than to arrest one innocent person.”

“As Seong-hee, I felt like I was back in my 20s, when I was active in the theater,” Ha said. “When it comes to acting for the stage, you are fully exposed. There are fewer spontaneous elements than in film.

“Also, if you make a minor mistake in pronunciation or with your lines, you immediately lose the confidence of the audience. I made up my mind to do my best to enunciate so that even the people in the back of the court would understand what I was saying.”

Fortunately, he said that his character was so similar to himself that Ha found it easy to identify with him, but that he had to practice to near exhaustion because of the enormous amount of dialogue he had to memorize.

Ha is one of only a handful of Koreans who have advanced in Hollywood. He made his Hollywood debut with “Never Forever” (2007), in which he plays an illegal immigrant who falls in love with a married white woman, played by actress Vera Farmiga. The film, by Korean director Gina Kim, won the Jury Prize at the 2007 Deauville American Film Festival.

Ha’s accomplishments have not come easily, and he has a reputation for being a hard worker.

“I give myself one task every day - such as going to bed only after reading the script 200 times, or reading the same line 50 times without any mistakes and reading it again with a pen in my mouth as a punishment when I make a mistake,” Ha said, adding that his philosophy on acting is to “find the best way to minimize mistakes.”

“When Robert De Niro was shooting ‘The Good Shepherd,’ he told Matt Damon that there is no way of predicting what’s going to happen in the next scene,” Ha said. “Whether to improvise or make minute calculations is the eternal dilemma of actors.”

When asked if he has ever asked his father, the actor Kim Yong-gun, for advice, Ha, whose real name is Kim Sung-hoon, demurred. “When I was in the play ‘The Good Doctor’ I performed in front of my father for the first time,” Ha said. “But it was unbelievably awkward and I’ve never performed for him since.” With “The Client” in theaters, Ha is busy working on two new projects, the films “War Against Crime” and “Love Fiction.” But the fast-paced schedule is nothing new for the actor, who has appeared in an average of three movies per year since 2008. And maybe it shows that, for him, being a workaholic is the best method of finding his way as an actor.