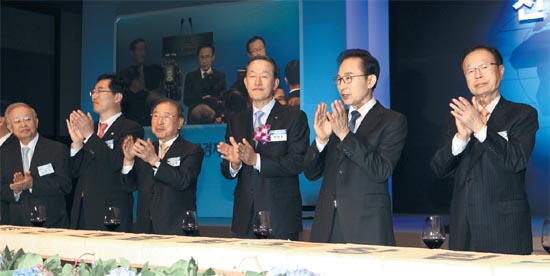 The Federation of Korean Industries (FKI), marking its 50th anniversary, mapped out a new vision for the country that would see it move up five places to become the world’s 10th-largest economic power by 2030.

“With our eye on such a specific aim, we need to work on securing greater global competitiveness by expanding our economic infrastructure, strengthening our technological prowess and accumulating more capital,” said Huh Chang-soo, the FKI and GS Group chairman.

The FKI cited Korea’s chronically low birth rate, rapidly aging society and weakening growth engines as major threats on the domestic front. In terms of global risk, he pointed to the emergence of strong rivals like China and the prolonged uncertainties in the U.S and Europe.

President Lee Myung-bak said the role of the FKI has changed.

“It used to be that FKI was at the center of the country’s attempts to overcome crisis, but now it finds itself [also trapped] in a crisis and can be seen more like an interest group for large conglomerates,” he said.

“Narrowing the gap between rich and poor, balancing coexistence and development, and promoting shared growth should be the new benchmarks of corporate culture,” he said. “These are the trends of today.”

The FKI has been at odds with the Lee administration in recent months as the president increased pressure on business conglomerates to share their profits with small and medium enterprises and contribute more to society.

Yesterday’s ceremony was a veritable who’s who of major players in Korea’s business and political circles.

The FKI is credited for prodding Korea along a path of economic growth.