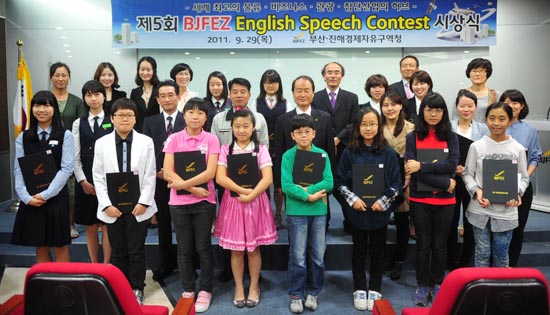 Winners of the BJFEZ English speech contest pose for a photograph after the awards ceremony.


The Busan-Jinhae Free Economic Zone Authority held its English speech contest award ceremony on Sept. 29. The 5th BJFEZ English Speech Contest was held for 3 days, from Sept. 20 to 22. There were 28 winners from the 156 candidates, seven from each of the four categories: Elementary, Middle, High and College.

A total of 7 million won was given away in prize money, including 1 million won as the top prize of the college level. An additional bonus for 13 of the 28 winners was the honor of being selected as recipients of scholarships valued at 10 million won from the Macheon scholarship fund run by TK Corporation, a major steel pipe and valve manufacturer that operates in the BJFEZ.

The judges noted that there has been a noticeable improvement in the contestants’ English speaking capabilities every year.

The contest is held annually to foster and strengthen a positive relationship between the BJFEZ and the communities of Busan and South Gyeongsang while building on the students’ English speaking abilities and instilling a sense of the local community in the context of the global community.

This also is part of the BJFEZ Authority’s on-going strategy to build awareness of the Free Economic Zone and its surrounding area.