At the recently held Frankfurt Motor Show in Germany, Martin Winterkorn, 64, chairman and CEO of the Volkswagen Group, was increasingly irritated as he visited the Hyundai Motor booth. Holding measuring tools in both hands, the chairman took a close look at the interior of Hyundai’s new i30, which competes with Volkswagen’s Golf model, particularly the vehicle’s very solid adjustable steering wheel. Winterkorn was annoyed that the i30’s adjuster doesn’t rattle, like the Golf’s does.

He scolded his design team, asking why Volkswagen couldn’t do it as well.

A YouTube video that captured the scene in Frankfurt has been viewed more than 1.4 million times as of yesterday. Internet users were impressed - based on their comments - that a chief executive of a global automaker was getting down and dirty doing his own measuring and blurting out his opinion about a competing car model.

The greater point illustrated, according to industry analysts, that the guys in charge of car companies these days know their torques from their dashboards - because they studied engineering at school. 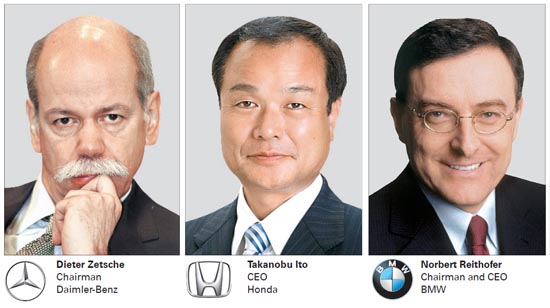 Many CEOs of global auto firms are natural science or engineering majors, unlike in the past, when car companies were run by business majors. This trend is especially obvious in Germany and Japan, the homes of global auto brands such as Audi, BMW, Mercedes-Benz and Honda.

Winterkorn studied metallurgy at the University of Stuttgart from 1966 to 1973. He was also a PhD student at the Max-Planck-Institute for metal research, where he earned his doctorate. His professional career began as a researcher at Bosch, a global auto parts manufacturer. He then joined Audi, becoming the head of Audi Quality Assurance, and then joined Volkswagen. Ever since he became chairman of the Volkswagen Group in 2006, Winterkorn has been an aggressive leader. Last year, Volkswagen acquired Porsche.

Norbert Reithofer, 55, chief of BMW, is also an engineer-turned-CEO. He joined BMW in 1987 as an engineer, working as a production specialist before becoming chairman of the BMW Group in July 2006. Under his leadership, BMW was able to overcome the global financial crisis in late 2000s, and even outpaced Mercedes-Benz to become the No.1 premium brand.

As a Japanese automaker, Honda is well known for CEOs with engineering backgrounds. Honda Soichiro, the company’s founder, left a will before he died in 1992 stating that the CEO of the Japanese automaker must be from the research department. Takanobu Ito, 58, who became chief of Honda in 2009, studied engineering at Kyoto University. He joined the automaker in 1978 as a research and development engineer specializing in chassis design. Currently, Ito is focusing the automaker’s business on developing small and hybrid cars.

Automakers based in the United States, in the meantime, have traditionally preferred finance whizzes as their CEOs. In recent years, however, while going through the ups and downs of the global economic meltdown, the companies are seeking out leaders with engineering experience.

Alan Mulally, 66, president and chief executive of Ford Motor, studied aeronautical engineering from the University of Kansas. Prior to joining Ford in 2006, he was executive vice president of the Boeing Company.

Since the mid 1990s, the big three U.S. automakers - Ford, Chrysler, and General Motors - wanted financial experts as their CEOs, as their business of selling SUVs was thriving. But they neglected investing in new car development, which brought them close to collapse when the SUV markets melted and the global financial crisis broke out.

What about Korean automakers?

Though Chung Eui-sun, vice chairman of Hyundai Motor, studied business management at Korea University, he is known to always accompany staff from the design, research and product teams at various motor shows. Chung is also known to be precise in pointing out the good points and bad of rivals to Hyundai Motor and Kia Motors models.

“Though our chief executives are not engineering majors, we have constantly placed importance on researchers and product managers, as they are the basis to developing quality cars,” said an official from the Hyundai Motor Group.