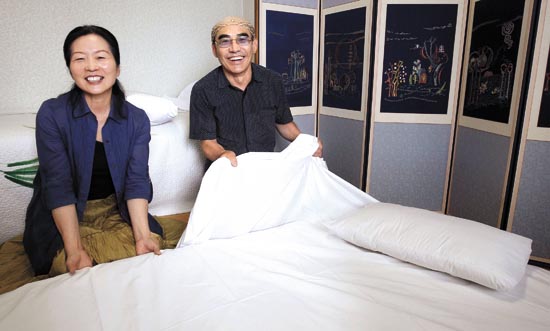 Kim Jong-su, right, and Woo Yeong-ok, the B&B (Bed and Breakfast) homestay owners, show off their house in Busan. They have run the business for 20 years. By Song Bong-geun

The couple, 66-year-old Kim Jong-su and 59-year-old Woo Yeong-ok, are both teachers in Eungbong Elementary School in Busan.

They renovated their two rooms in Dadaepo-dong after their two sons grew up and left for Seoul to work and began the bed and breakfast about 20 years ago, before this type of accommodation was available in Busan.

They decorated the house in traditional Korean style with screens that were covered with Korea’s traditional ink-and-wash paintings (or sumie) and hanging bangpai (shield) kites on the walls. They also provided tour guidebooks written in English.

“French envoys who visited our home 20 years ago came back again and told us that they couldn’t forget our home because they never had the experience of living in a house like this.”

Recently, the Korea Tourism Organization issued a government certificate to approve Kim’s house as a “Korea Stay.” The certificate designated them as a Korean B&B (Bed & Breakfast) business.

The business designation was developed by the tourism organization in order to help compensate for the lack of accommodation in major cities including Busan, Daejeon, Gwangju and Daegu.

The organization said it approved 200 houses in the nation for the B&B business designation and it will begin to connect the houses with international visitors.

Kim opened several lectures with his homestay manual that gave tips on how to run the business for foreigners.

“They love it when we introduce not only our house decorations, but also our living styles. We had a lot of trouble in the beginning persuading visitors to take off their shoes when they entered the house, for example, but it is a very valuable thing that I can make many international friends who are living outside the country with good memories of Korea. I’m proud that I’m taking part in producing good images of Korea.”

Kim also said that these B&B homestays could be a solution for Chinese tourists who are suffering from a lack of accommodation though they want to visit Korea.

“The Chinese have a similar living style with us,” Kim said. “It means that they can communicate more easily than people from the West, and I think it would provide more friendly circumstance for tours in Korea.”