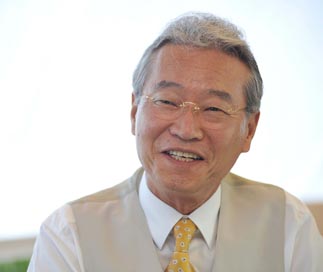 For those who can’t afford a 4,000 won ($3.39) hit to the pocketbook for a cup of coffee at a popular coffee shop such as Starbucks, there is always an option at convenient stores: sipping on Cafe Real.

The prepackaged coffee only costs 1,000 won. Buyers only need to open the package and pour the already liquefied drink in the cup with ice to enjoy their afternoon coffee.

The drink was created by Jardin’s chairman Yoon Young-ro (63). Although Jardin is a competitive processed-coffee manufacturing company now, it started off as a small shop.

Jardin opened its first coffee shop in 1988, 11 years before Starbucks opened here in 1999.

In just 10 years Jardin began supplying instant coffee to major companies, including Namyang Dairy and Korea’s retail giant E-Mart. The biggest concerns Yoon faced were how to expand his company and how to develop an instantly recognizable product. But there was a limit on supplying coffee to retail and dairy companies.

“After the financial crisis of the late 1990s consumers became polarized,” Yoon said. “With consumers’ standards already raised I believed an affordable, high-quality product would be a hit.”

The result of Yoon’s belief was Cafe Real, which first launched in 2005.

The idea was to offer quality coffee that is equivalent to that sold at coffee shops like Starbucks which could be conveniently enjoyed in offices and at home.

His strategy worked, and this year the company is expected to earn an annual revenue of 55 billion won. The industry expects the convenience store coffee market this year to amount to 500 billion won in total, with the nation’s entire coffee industry to be 3 trillion won.

Yoon is not unfamiliar to the world of processed food products as he is the younger brother of Yoon Young-dal, chairman of one of the nation’s leading confectionery companies, Crown Haitai Confectionery.

The younger Yoon worked at Crown Haitai Confectionery for 10 years, which he says was a great experience since he learned much about starting and running a business.

He stressed that although he worked at a confectionery firm his own first business was coffee.

“While confectioneries compete with taste, coffee has to compete in a broader cultural sense, not only the taste but also the atmosphere,” Yoon said. “Coffee is a food product that sells added values.”

Yoon’s father, Yoon Tae-hyun, was the creator of the famous Crown Sando biscuits that are still loved by many consumers today.

The senior Yoon saved money for his business while working at Korean dumpling restaurants and tailor shops. Yoon was one of Korea’s first entrepreneurs in the post-Korean war era as he turned a small bakery into one of Korea’s leading confectionery companies.

While working at the confectionery firm Yoon Young-ro said his father gave him some advice.

“A business cannot win the hearts of customers with only flashy advertisements,” Yoon said his father told him. “You have to offer high-quality goods at reasonable prices.”