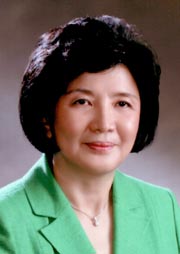 Yu Jung-keun, 66, will become the 27th president of the KNRC after 26th President Yoo Chong-ha. Yu will take over after receiving designation from President Lee Myung-bak, the honorary head of the Red Cross, and being inaugurated as the head of the relief organization.

As second-in-command, Yu was vice president of the KNRC since Jan. 12 of this year. The KNRC claims to have chosen Yu according to the global trend - 41 out of the 186 Red Cross nations have a female chief. They believe that her charismatic leadership will not only improve upon the image of the South Korean Red Cross but will be helpful for encouraging North and South Korean talks and international cooperation.

Yu began a relationship with the Red Cross when she volunteered for the Red Cross Special Advisory Committee for Woman’s Volunteer Service in 1998. She became the chair of the committee and auditor in 2008. The Red Cross states that among other admirable traits, President Yoo Chong-ha’s successor has been quietly volunteering behind the scenes for years.

Among her many experiences in leadership positions, Yu has been the chairwoman of the Kyungwon Culture Foundation since 1984, where she worked actively to raise scholarship money for students from low-income families. She also served as president of the Kyunggi Woman’s High School Alumni Association for its centennial anniversary. In her active career, Yu has focused on providing aid to refugees and multi-ethnic families.

The KNRC believes that as its new president, Yu will continue to encourage participation from Red Cross members while providing the people with a friendly, more approachable image.

Yu is a graduate of Kyunggi Girl’s High School and received her Bachelor’s degree in English Language and Literature at Ewha Womans University and a Master’s degree from the Columbia Graduate School of Education. She is married to Choi Chang-gul, honorary chairman of the Korea Zinc Company.

The Red Cross was first established in Korea in 1905 but was re-established several times over the following half century. It was formally recognized as the Republic of Korea Red Cross in 1949 and became recognized by the International Committee of the Red Cross (ICRC) in 1955.

Since then, the South Korean Red Cross has been active in providing relief aid and serves as a key channel for aid to North Korea and temporary reunions between the families separated in the Korean War.