Chrysler hoping Fiat 500 a bestseller in Korea too

Chrysler hoping Fiat 500 a bestseller in Korea too 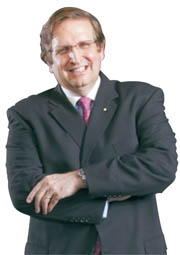 Chrysler Korea, the local unit of the U.S.-based automaker, will introduce the Fiat 500 in the first half of next year to meet the growing demand for compact and small cars in the local market.

According to Gregory Phillips, the company’s president and chief executive, diversifying its lineup based on the Chrysler-Fiat alliance will help expand its presence in Korea. The 500 is Fiat’s best-selling model.

“We have been focusing on in-house restructuring and sales networks reinforcement in preparation of the Fiat brand launch [in Korea],” Phillips told the Korea JoongAng Daily.

“Currently, our business plan for the new brand launch has been submitted to the headquarters, and we are hoping to introduce the new brand to Korean customers in the first half of 2012.”

The automaker is now mulling whether to introduce Fiat’s high-performance Alfa Romeo brand in Korea after the Fiat launch.


Q. What is the backstory to the decision to unveil the Fiat 500 here? 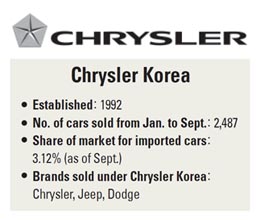 A. We are planning to add new (city car and subcompact) models by introducing the Italian brand Fiat, which is already well known in the world for its unique design, fun driving, performance and high fuel economy. The main model will be Fiat’s world’s best-selling model 500. As the demand for compact and small cars is increasing in the local market, Fiat 500 will satisfy the high expectation and fastidiousness of Korean customers. And the model will target young customers in their 20s and 30s who are looking for vehicles that satisfy their lifestyle with uniqueness, fuel efficiency and performance. It will be the biggest competitor of MINI.

It’s been more than three months since you became the head of Chrysler Korea. What changes have you witnessed in the local automotive industry so far?

Korean automakers have become highly competitive in both local and global markets today. Hyundai and Kia have made a major step forward in terms of design, technology and performance, providing competitive models in the world market. And Fiat-Chrysler CEO Sergio Marchionne has been keeping a close eye on Hyundai and Kia’s fast progress.

Have there been any significant pricing changes?

The price gap between domestic and imported cars is narrowing. Prices of domestic vehicles have been increasing recently, while imported brands have become more cost-competitive supported by the [Korea-U.S.] free trade agreement. For example, European carmakers have lowered vehicle or parts prices recently. As a result of this, more and more domestic customers are considering import cars as another option, and vice versa. I think imported brands are no longer competing among themselves and should be prepared to compete with domestic cars as well.

What kind of transformation has Chrysler Korea gone through?

After filing a bankruptcy protection notice in 2009, we have undergone an intensive restructuring. After the Chrysler-Fiat alliance in June 2009, Chrysler has become a brand new company and returned as “New Chrysler.”

With the help of competitive new models, we are making the biggest growth among America’s “big three” - General Motors, Ford and Chrysler - in the local market.

Another important thing that we have concentrated on so far is reinforcing the competitiveness of our sales and service representatives. Customers have the most difficult job in the market because there are so many cars to choose from, as nobody makes a bad car today.

The key will be focusing on how we train our sales representatives so they can communicate with customers about our high-quality products. It is also important to reinforce our services for high customer satisfaction.

The import vehicle market in Korea is growing. What is your sales target for this year?

We are targeting a 4 percent market share this year. As of August, our share was 3.13 percent. We will concentrate more on in-house and sales networks reinforcement as we prepare to leap forward next year.

What are the biggest challenges that remain?

Our primary goal is building a new brand image. After the Fiat-Chrysler alliance, our products have been significantly upgraded, and we plan to develop various marketing activities that will give customers the chance to feel and touch our new model.

Jeep’s popularity, for example, has been continuously increasing in the local market over the last few years, and it is believed that Jeep has a great potential to grow further in Korea. We plan to embed the Jeep brand into Korean culture, as the brand has the deepest relationship with Korea since its first introduction in 1945. The Jeep brand first arrived in Korea with the U.S. Army during the end of World War II, and since then, it has long been a peacemaker and a good friend to the Korean people.

Also, as outdoor activities like biking, camping, rock climbing and water sports are becoming incredibly popular among Korean consumers, the need for SUVs is growing.

We will continue to focus on strengthening Jeep’s brand identity by connecting its heritage and versatility with Korean culture and lifestyle. I’m confident that Chrysler will take back the No. 1 position among American brands [in Korea]. And in order to achieve this, we will focus on introducing competitive products, expanding networks throughout the nation and improving customer satisfaction.

How did you get involved in the automobile industry?

After I was discharged from the U.S. Army as a colonel in 1997, I was on a casual outing with one of my close friends, where we discussed my next step. My friend, who was working for an automotive company, helped me start my journey in the industry, and I have been here ever since.

I began by joining Daewoo Motor America as the deputy chief manager, who was responsible for eight southeastern states. I further built up my career in Honda and managed a five-state region overseeing all business development actions. Then, I joined Nissan North America in 2005 as a dealer operations manager.

In 2006, I returned to Korea as the CEO of Nissan Korea, where I was in charge of growing the Infiniti brand and launching the Nissan brand here.

In 2010, I moved to Renault-Samsung Motors as vice president of sales, marketing and service.

How would you describe your business philosophy?

I always stress that “we are individually smart, but collectively genius.”

Every one of our team members is very smart and hard working. And as president and CEO of Chrysler Korea, I believe my duty and responsibility is to help each member to express and share their opinions freely, make the best of their abilities and lead the team toward the same goal.