Timeline of a behemoth shows belief in green growth

Timeline of a behemoth shows belief in green growth 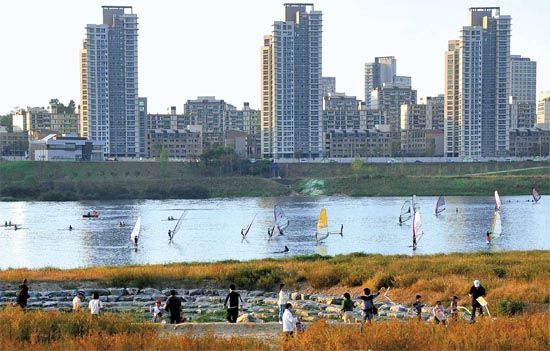 People walk and windsurf at the Sejong Reservoir in Yeongi County, South Chungcheong, on Sept. 24. The reservoir, which is part of the Geum River near Sejong City, was the first of 16 reservoirs to be opened to the public as part of the central government39s four-rivers restoration project. The project is set to wrap up this month, after nearly three years of construction and much political controversy. [NEWSIS]


Stemming from President Lee Myung-bak's campaign of "low-carbon, green growth," the four-rivers restoration project was first introduced as part of a "Green New Deal" in late 2008 in the aftermath of the global credit crunch.

The Blue House actively promoted the project, aimed at improving water quality and flood control and developing riversides along the Han, Geum, Yeongsan and Nakdong rivers, by stressing that the development would also create jobs and bolster regional economies.

Opposition lawmakers expressed their skepticism, arguing that the projects barely disguised Lee's ambitious plan to build grand canals across the country, but the government stressed that this was not the case. On Dec. 15, 2008, the Presidential Committee on Balanced National Development officially endorsed the Four Major Rivers Restoration Project.

For this "Green New Deal," the Lee administration decided to spend 14 trillion won ($12 billion) from late December last year until 2012 to dredge the four rivers to improve the water quality.

Building or modifying dams and dikes for flood control and creating reservoirs for irrigation were also main goals as well as creating leisure facilities such as cycling tracks and yacht marinas along the riversides. At the time, the government said the project would create 190,000 jobs and 2.3 trillion won of economic activity.

The official launching ceremony took place on Dec. 29, 2008. The headquarters for the project were then set up the following February and the office expanded two months later.

Interim blueprints were presented on April 27 of that same year and the government toured 12 cities and provinces nationwide shortly afterwards for promotional purposes and held conferences with experts. A public hearing session also took place on May 25, 2009.

On June 8, 2009, a master plan was announced by the Ministry of Land, Transport and Maritime Affairs. Under the program, the budget was increased to 22.2 trillion won and 13 major streams were added to the project. The government said 340,000 new jobs were expected to be created.

To persuade the public, Lee declared on June 29, 2009, that he would give up his pet Grand Canal Project and devote more attention to the four-rivers restoration project.

In early September 2009, after more than two years of construction, work finished on the Hwamyeong District of the Nakdong River in Busan, making this the first location to open. The government held a ribbon-cutting ceremony on Sept. 10 to celebrate the 40 billion won project.

As of Sept. 30 last year, the four-rivers restoration project was 28 percent complete. Half of the reservoirs had been built, but only 28.8 percent of the targeted 529 million square meters of riverbed had been dredged.

Meanwhile, on Nov. 4, the first conflict between the central and a provincial government occurred. The Ministry of Land, Transport and Maritime Affairs decided to take over the construction work along the Nakdong River after a dispute with the South Gyeongsang provincial government, which was in charge of the project.

The central government said the provincial government, headed by liberal Governor Kim Du-kwan, had intentionally derailed and slowed down construction, giving it no choice but to take over the program along the Nakdong River.

After this, the pace of construction picked up. As of Dec. 23, the ministry said the national project was 44.5 percent complete. The 16 reservoirs, which will hold 800 million tons of water, were, on average, nearly 70 percent complete. And 62.5 percent of the dredging work had been finished.

In a radio speech in August, Lee hailed the project as a success. Testament to this, the frequently flooded areas along the rivers did not suffer serious damage this summer despite the onslaught of horrendous downpours across the nation.

The four-rivers project will wrap up this month and the public will be given gradual access to the areas near the 16 reservoirs, An opening ceremony for the Sejong Reservoir on the Geum River was held on Sept. 24. 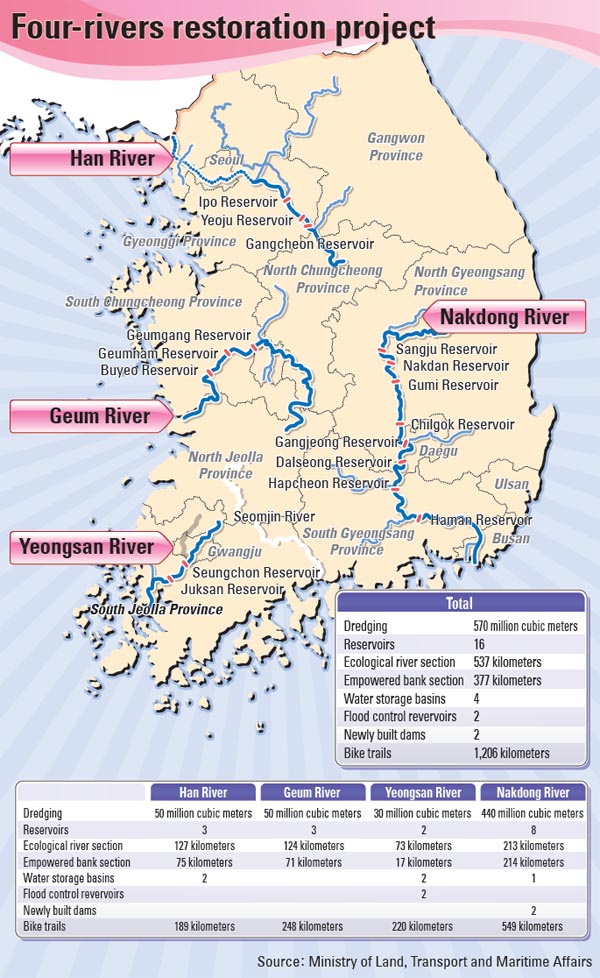