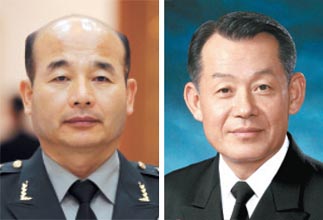 Gen. Jung Seung-jo, 54, deputy commander of the ROK-U.S. Combined Forces Command (CFC), has been nominated the new chairman of the Joint Chiefs of Staff, the Ministry of National Defense said yesterday.

Jung will replace Gen. Han Min-koo, 57, who was named chairman in June 2010, as the country’s top military officer.

Kwon Oh-sung, 55, chief military negotiator for the Joint Chiefs of Staff, was tapped as the new deputy commander of the CFC while Gen. Choi Yun-hee, 56, of the Navy was nominated as the Navy chief of staff.

According to the ministry, the reshuffle comes as the country prepares to take over wartime operational control of its military from the United States in 2015.

“The reshuffle was carried out considering their capability, professionalism and personality,” said a ministry official. “[The reshuffle] will secure stability and a stronger military.”

Choi, the new Navy chief of staff, is from Hwaseong, Gyeonggi, and the 31st graduating class of the Naval Academy.

The cabinet is scheduled to authorize the reshuffle tomorrow, followed by President Lee Myung-bak’s formal appointment of the officers.

In early November, appointments of lieutenant generals will take place, according to the ministry. “Well-qualified generals will be appointed considering their capabilities, irrelevant to their hometown or former posts.”