A world of tourism

A world of tourism 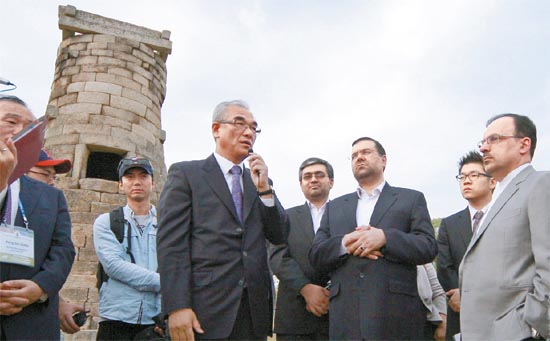 Minister of Culture, Sports and Tourism Choe Kwang-sik explains the history of Cheomseongdae, the ancient observatory, in Gyeongju yesterday to participants of the 19th session of the General Assembly of the United Nations World Tourism Organization.

The event, aimed at creating a road map for the tourism industry’s sustainable growth, was scheduled to take place in Korea’s southern ancient city in North Gyeongsang from last Saturday until this coming Friday.

Including the ministers and vice ministers of 60 countries, 800 government delegates and experts from 100 countries from around the world attended the session.

It is the second time Korea has hosted the event. In 2001, Korea co-hosted the 14th session of the conference with Japan. [NEWSIS]