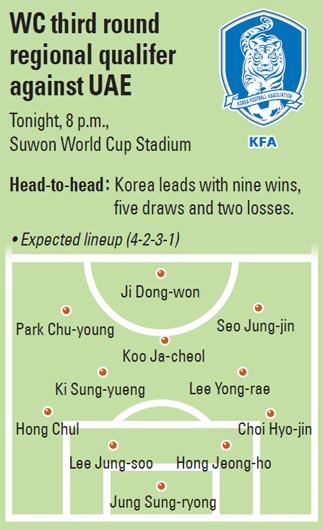 Korea will make few changes in its lineup from last week’s friendly to face the United Arab Emirates as the third round of Asian qualifiers for the 2014 World Cup kicks off tonight at Suwon World Cup Stadium in Gyeonggi.

Led by coach Cho Kwang-rae, the national team currently tops Group B with a win and a draw, while the UAE sits in last place with two losses. Korea, ranked 29th in the FIFA rankings, also leads the UAE in head-to-head meetings with nine wins, two draws and five losses.

Cho said that the team will not only win the game in front of what is likely to be a packed stadium in Suwon, but they will try to score as many goals as possible to boost their goal difference, which is the reason Korea is currently topping their group. Korea will travel to the UAE on Nov. 11 and Lebanon on Nov. 15.

“Although we still have to deal with the level of attacking football, the basic concept of dominating the match and scoring a lot of goals hasn’t changed,” Cho said to Ilgan Sports, the JoongAng Ilbo’s daily sports newspaper, yesterday. “If we get a good result against the UAE, we can cruise on the upcoming two away matches in the Middle East.”

To prepare for this match, Cho’s team had a friendly with Poland on Friday, which ended in a 2-2 draw.

Team captain Park Chu-young scored both goals to show that he still has the goal-scoring instinct, but one thing that bothered fans was the limited impact Lee Dong-gook, who featured for the national team for the first time since the 2010 World Cup, had on the match.

Lee was expected to bring some flair to the team’s attack, but the Jeonbuk Hyundai Motors striker couldn’t replicate his club form for his country. Cho, however, said he is planning to use Lee as a trump card in the second half of the match against the UAE, indicating that the 32-year-old still has a role to play.

Lee, who has 16 goals and 15 assists in 27 K-League matches, said he is ready to play for the team in any role that is given to him.

“I don’t think my performance against Poland was bad,” said Lee, who has 85 international caps. “I’m in good form and I believe a chance will be given to me in the match against the UAE.”

While Lee is out of the starting lineup, Cho is expected to move Sunderland youngster Ji Dong-won up front and pair Arsenal striker Park with Jeonbuk midfielder Seo Jung-jin on the flanks. Seo set up Park’s two goals in the friendly against Poland.

“I played with Park and Ji during the Asian Games last year, so there is no big difficulty for me to play with them,” Seo said on Sunday after the team’s training at the National Football Center in Paju, Gyeonggi. “I will push harder in the UAE match since you can’t play bad after showing a good performance in the previous match.”

Wolfsburg’s Koo Ja-cheol, who played as a defensive midfielder on Friday, will also move up to start as an attacking midfielder, while his vacant position will be filled by Suwon Bluewing’s workhorse Lee Yong-rae. Lee will pair with his usual partner Ki Sung-yueng.

“Koo, Lee and Ki won’t have problems because they have played so many games together,” Cho said.

Cho is also expected to make some changes on side defense as his test in the friendly match turned out to be less than average.

Center-back Lee Jae-sung started at right-back against Poland but pundits think Cho may go with Choi Hyo-jin instead.