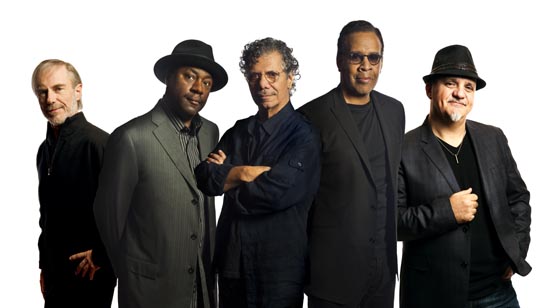 Chick Corea and his band, Return to Forever, play two concerts in Seoul this week. Provided by In Production


Legendary jazz pianist Chick Corea is set to play his first concert in Korea tomorrow and Friday with Return to Forever, the jazz-rock fusion band he has been leading since 1971.

Having won 16 Grammy Awards in his 50 years in music, the 70-year-old American artist has produced compositions that are widely considered jazz standards.

The set list for the long-awaited concert, according to local concert agency In Production, includes “Spain,” “Romantic Warrior,” “After the Cosmic Rain” and “Mirage.” A spokeswoman with the agency said the upcoming concerts target “Korean men in their 30s and 40s with good memories of fusion jazz from the 1970s.”

Return to Forever is considered one of the core groups of the jazz-fusion movement of the 1970s - along with Mahavishnu Orchestra, led by guitarist John McLaughlin, and Weather Report, co-led by keyboardist Joe Zawinul and American saxophonist Wayne Shorter.

Founded by Corea while he was working in Stan Getz’s band, Return to Forever has cycled through a number of different members, with the only consistent one being bassist Stanley Clarke.

The band reunited in 2008 after 25 years and has since been touring the United States, Europe, Australia and Asia as part of its “Return to Forever IV: World Tour 2011,” referring to the idea that this is the fourth incarnation of the band.

The band’s initial lineup featured Stanley Clarke on bass, Joe Farrell on reeds, the Brazilian team of percussionist Airto Moreira and singer Flora Purim, in addition to Corea on keyboards.

Born in Massachusetts, Corea started studying piano at the age of four with his father, a jazz trumpet player. After moving to New York, Corea studied music for a month at Columbia University and for six months at the Juilliard School of Music. He is said to have quit both schools after having found them disappointing. He began his professional career in New York in the 1960s and he soon began exploring dissonant, avant-garde music. In 1968, he replaced Herbie Hancock on keyboards in the legendary Miles Davis’ band at a time when Davis was experimenting with rock-oriented rhythms.