iTunes great for Apple, but was it for music biz?

iTunes great for Apple, but was it for music biz? 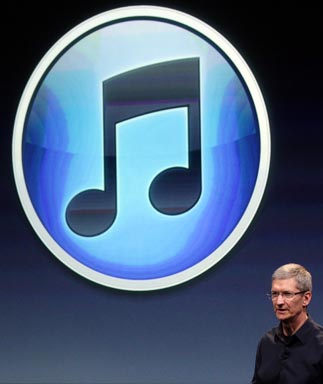 NEW YORK - When Apple rolled out iTunes for the masses in the spring of 2003, the music industry was at a point of transition - and chaos.

Entering the new millennium, albums were enjoying blockbuster sales of several million units for superstar artists, and profits were booming. Yet the threat of Napster and other forms of illegal downloading threatened to eviscerate those profits as many music fans were getting used to the idea that music, and loads of it, could be free.

Apple’s iTunes entered that landscape with a concept that wasn’t exactly new: a system where you could pay for songs online. Yet iTunes, with its simple interface, its simple concept - 99 cents per song - and revolutionary MP3 device, the iPod, made it the golden standard.

The entry of Apple and its leader, Steve Jobs, who died Wednesday, into the music world was more than a success - it was a phenomenon. Today, iTunes is the largest music retailer, has redefined the listening experience and has largely become the way that music is consumed.

What’s less clear is how much the music industry - which is continuing to decline - has benefited. Even today, consensus is mixed.

“It forced change in a positive way. People who are critical of what iTunes may have done perhaps have short memories and don’t realize that the alternative at the time was that an enormous amount of music was leaking onto the Internet and being consumed for free,” said James Diener, CEO and president of A&M/Octone Records. “The alternative was to inspire people to buy music, and to go to a digital retail site. .?.?. That was a remarkable step forward.”

Apple set the pricing, to the chagrin of the music industry, promoting parity for singles and albums.

“I think what iTunes did, which was wise on their part and difficult necessarily for the industry to appreciate at first, was they just standardized all the pricing,” Diener said.

Diener believes that price standardization was one of the key reasons for iTunes’ success. But while iTunes was booming, the era also hastened the demise of traditional retail stores like Tower and Virgin. No longer did rabid fans need to form a line in front of a music store to get their favorite album, then play it once they got home; They could order it at home and listen instantaneously.

They also didn’t have to buy the whole album: iTunes ushered in the era of the singles artists. Cherry-picking songs from albums has become the norm, and some artists have complained that iTunes led to the diminishment of the album.

“I don’t disagree with some of that criticism,” Diener said. “By unbundling the album and allowing consumers to buy songs one at a time, it changed the whole nature of consumer thinking of what is the basic unit of music - is it an album or is it a single?”

But Bill Werde, editorial director at Billboard, said Napster and other forms of illegal downloading already had started that process in motion.

“I don’t think that iTunes unbundled the album, but I think Apple sort of benefited from this ecosystem that certainly supported the single,” he said. “Really, it’s the music fan that unbundled the album, by all of these fans clearly responding to this amazing new way to experience their music. I mean, the shuffle button? I think the shuffle button may have single-handedly changed the musical horizon of 50 percent of the world.”

Yet for all of iTunes’ success, the music industry is still floundering. While sales are up slightly this year, the industry has been on a dramatic decline for the past decade, as labels have been shuttered and thousands of jobs lost as it continues to contract. While digital downloads continue to explode, overall album sales have dropped by at least half.

“Steve Jobs leaves behind a little bit of a complex legacy,” Werde said.