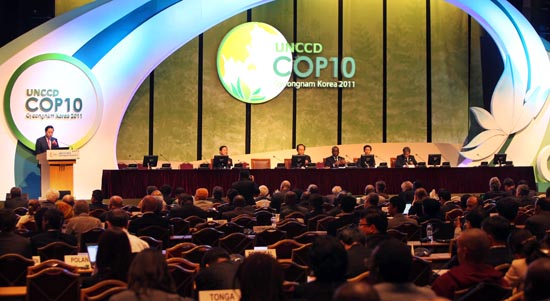 The 10th session of the Conference of the Parties to the United Nations Convention to Combat Desertification got under way yesterday at the Changwon Exhibition Convention Center in Changwon, South Gyeongsang. Under the theme of “Care for Land, Land for Life,” over 3,000 officials from 194 countries are participating in the meeting, which ends on Oct. 21 [YONHAP]


Tablet PCs replaced paper documents at the start of a 12-day UN conference against desertification that got under way in Changwon, South Gyeongsang, yesterday.

The high-tech gadgets were aimed at fostering an ethos of green growth and promoting a low-carbon lifestyle as climate change remains at the top of the world body’s agenda.

This is the first time that the Conference of the Parties to the United Nations Convention to Combat Desertification (UNCCD COP 10), now in its 10th session, has been held in Asia.

“This meeting aims to raise awareness among the business community of the importance of land and encourage their involvement in the protection of soil,” said Korea Forest Service Minister Lee Don-koo, who also chairs the international convention.

“As the government is limited in what it can do independently, the forum was launched to infuse government policies with creative ideas, technologies and resources from the business world.”

Over 3,000 government officials, UN policy makers, business leaders and nongovernment officials from 194 countries convened for the meetings aimed at finding effective solutions to desertification under the theme of “Care for Land, Land for Life.”

The event is sponsored by Hanwha Solar, Hyundai Motor Korea and the Korea Wood Panel Association among other businesses and organizations.

The world must stop desertification and land degradation because they corrode sustainable development, Luc Gnacadja, executive secretary of UNCCD, said at the first plenary session.

He warned that land degradation over the next 25 years may reduce global food production by up to 12 percent, which could boost world food prices by as much as 30 percent on top of inflation.

Gnacadja said it was also important to bear in mind that the UN Conference on Sustainable Development (UNCSD) will take place in June next year in Rio de Janeiro, Brazil.

“I anticipate that parties to the UNCCD will devote time here at Changwon to discuss and agree on key messages they would like to convoy to the Rio Summit,” he said.

The COP is the highest decision-making organization of the UNCCD with 194 member countries. It strives to provide financial and technical aid to combat desertification and reduce drought damage. The meeting was convened annually from its inception in 1997 and every two years from 2003. Korea joined in 1999.

According to the UNCCD, 12 million hectares (46,332 square miles) of land are transformed into man-made desert due to drought and land degradation each year. This is equivalent to 23 hectares every minute, an area large enough to harvest 20 million tons of grain a year.

Minister Lee pointed to the Sustainable Land Management Business Forum as one of the key events.