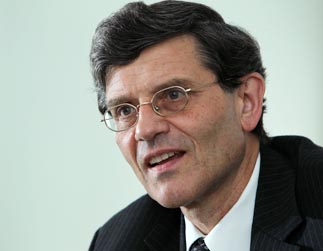 German Ambassador to Korea Hans-Ulrich Seidt predicted the two Koreas will reunify in the next 30 years, though he said he can’t predict the details of reunification, including how it will happen and what the conditions will be. Still, he said he knows reunification will enable him to travel freely between the Koreas and have coffee at a Western coffee shop in Pyongyang in his lifetime.

Seidt, in celebrating the 21st anniversary of Germany’s reunification on Oct. 3, expressed his optimism about Korea’s reunification in a recent interview with the Korea JoongAng Daily and JoongAng Ilbo.

Seidt cited beefed-up inter-Korean contacts in recent months and a discussion of a gas pipeline construction linking Russia to South Korea through the North, as a good sign of reconciliation between the two Koreas.

“I am certain that a market opening will link the Pyongyang railway with Moscow, Paris and London,” he said.

“Thirty years later, when I am 90, I will come to Seoul, and then I will be able to go to Pyongyang and Kaesong on the KTX. In Pyongyang, I will drink coffee at Paris Baguette or Starbucks. I can at least predict that will happen,” he said.

Seidt said the nuclear crisis in Japan in March will prove to be a starting point for a two-way competition regarding the use of nuclear energy and that Germany is ready to take the less-traveled road.

“Only a few years ago, we saw nuclear power as a transitional source of energy that we could depend on until we found other less dangerous sources of energy,” Seidt said.

“After the recent nuclear plant crisis in Japan, we’ve concluded that we have to end this transitional period as quickly as possible.”

German Chancellor Angela Merkel said earlier this year that Germany will phase out its nuclear power industry by 2020, a decision that only a small number of countries like Italy and Switzerland have followed, while many other countries, including the majority of European Union members, appear committed to nuclear energy.

Seidt said countries will make different conclusions about the radioactive leak from the Fukushima power plant in March, as they did after the Three Mile Island accident in the United States in 1979 and the Chernobyl disaster in Ukraine in 1986.

He said it is understandable for countries like Korea, which has few natural resources, to pursue nuclear energy, which is still hailed by some countries as the cleanest, most effective form of energy that also has the potential to produce economic benefits.

But he said that Germany believes that ending its pursuit of nuclear energy will prove to be a better decision in the long term, not just for economic reasons but to achieve loftier goals.

“We are setting up a goal of leading global efforts to make a world without CO2 emissions and without the risk of nuclear accidents,” he said.

Seidt said divisions on the nuclear energy issue will become more distinct when the world’s major countries gather at a nuclear security summit in Seoul next March.

The Seoul Nuclear Security Summit, the second event of its kind following the inaugural meeting in Washington in April 2010, will bring together more than 50 countries, many of which are pursuing nuclear energy.

Germany, although choosing to move away from nuclear energy, plans to help other countries devise better nuclear safety protocols in order to make the world a safer place, Seidt said.