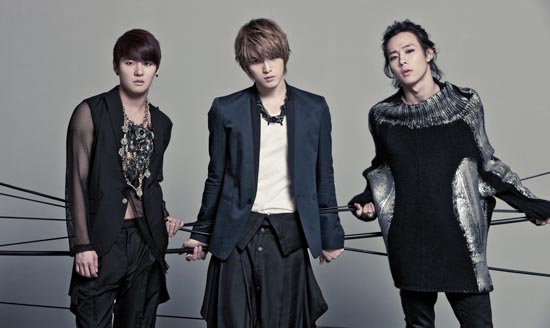 
It’s been a tough year for K-pop band JYJ. Just a year ago, the band was in the midst of a lawsuit and simultaneously on the verge of releasing its first album. Now, however, the band appears to have shed the specter of the lawsuit that threatened to obliterate it and is thriving on the back of its new album, the Korean-language “In Heaven.”

Though the threat of extinction would have rattled some, the JYJ members - Kim Jae-joong, Park Yoo-chun and Kim Jun-soo - seem to see it as an opportunity. At a press conference on Sept. 30, members of the band said they have “realized how meaningful it is to get our music out to our fans.”

The group, comprising three members of the popular band TVXQ, split from the group in mid-2009 and filed suit against SM Entertainment, claiming their contracts were unfair.

Though they won the suit, local distributors were reluctant to release the second album here because of the ongoing dispute with SM, Korea’s largest entertainment agency.

But that doesn’t seem to have diminished the band’s prospects. The album has already racked up 300,000 in sales since its Sept. 27 release and the band is to embark on a tour to Europe at the end of the month, with stops in Barcelona on Oct. 29 and Berlin on Nov. 6. Both shows represent the first appearance by a Korean band in the respective cities.

The band seems excited about the upcoming tour, saying its biggest hope is for “European fans to sing along to our songs,” eight of which they created and produced themselves.

“The album may not be perfect, but we like it all the more because we made it ourselves,” Park said. “And fans can clearly see our true colors in the songs.”

The sound of the album is richer and more complex than the previous one. The title song “In Heaven” and the single “Fallen Leaves” are melodious, melancholic ballads, while “Mission” and “I.D.S.” have a driving dance beat.