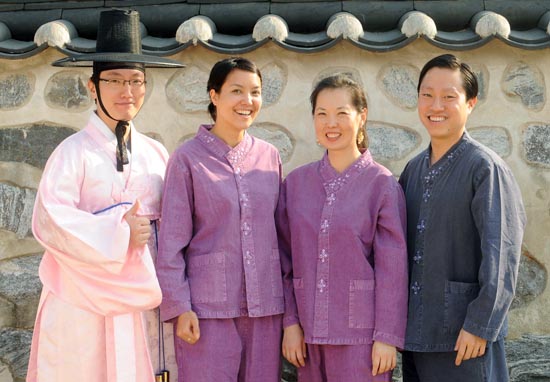 
Kim Jin-han, 30, an Australian-Korean lawyer, said he had no clue about the significance of the wooden duck he handed over to the bridegroom at a mock traditional wedding on Wednesday afternoon at Hanok Village in Chungmuro, central Seoul.

But he said that his lack of knowledge hardly affected his appreciation of his role as “duck steward,” or best man, even though he later found out it signified a groom’s lifelong commitment to his bride.

“I think it’s beautiful to see all these nice, traditional clothes,” Kim said. “It’s good to see how marriages were conducted in the past, and how this could be reflected in .?.?. my future marriage, maybe?”

Kim and dozens of other overseas Koreans were here on a trip arranged by the Overseas Koreans Foundation as part of its annual Future Leaders Conference. Ninety-two people from 21 countries participated in the four-day event in Seoul that ended Friday.

The conference was created in part to help young overseas Koreans find their roots. Since its inception in 1999, more than 600 people ranging in age from 20 to 40 have participated in the conference and related trips.

Another attendee, Deimann Insa Kim, 29, was on her second visit to the country after having studied Korean at Yonsei University four years ago.

Though the trips are arranged to provide attendees with access to culture, for Kim and many of the other participants, networking is just as important, if not more so.

“Identity is already there, but it’s just a good way to stay connected,” said Kim, who has a Korean mother and a German father.

Several participants also said that Korea’s growing influence in the world has helped boost interest in the country among young overseas Koreans, whose parents or grandparents may have tried to avoid the connection.

Kim, a graduate of Eberhard-Karls University in Germany who has worked in Rwanda with the World Food Program since last year, said the influence of Korea’s Saemaul Movement is increasingly visible in the African country.

The Saemaul Movement, a state-supported rural development campaign that contributed to Korea’s rapid economic development in the 1970s, is being replicated in developing countries in Africa and Asia with the support of the Korean government.

“We’ve received funds from Korea’s Ministry of Foreign Affairs and Trade to implement a project that is based on the Saemaeul Movement, including food-for-work activities in certain areas in Rwanda,” she said. “Korea is trying to help other countries by passing on its experiences. That is useful.”

Sandy Kim, 39, executive director of the Korean American League for Civic Action, a U.S.-based NGO, said previous generations of overseas Koreans were focused on surviving in a foreign land but that younger Koreans are eager to connect with one another.

She said she has received many inquiries from young overseas Koreans asking for advice on starting volunteer organizations and activities.