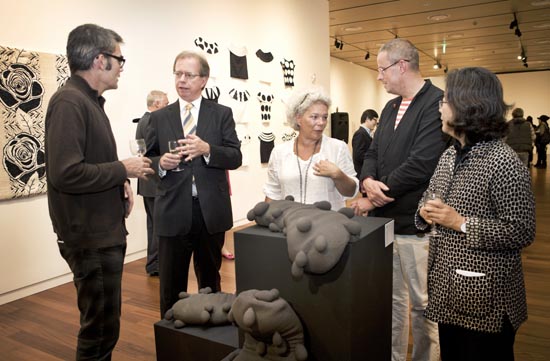 
The first event hosted by newly appointed Swedish ambassador to Korea Lars Danielsson was neither a signing nor a groundbreaking. It was an art exhibition.

The exhibition, “Swedish Contemporary Craft Art,” which continues through Oct. 27 at the Korea Foundation Cultural Center, aims “to show the modern Swedish craft art to the Korean audience,” the ambassador said in an interview with the Korea JoongAng Daily.

“You may think Sweden and Korea are very different,” Danielsson said at the Oct. 6 opening. “But hopefully this exhibition will show that although the two countries are far apart, there are things that we share in common.”

From a hanging cabinet made of oak to a vintage-style wedding dress made of recycled cloth, the exhibition displays some 50 pieces by renowned Swedish artists such as Hans Ahnlund or Ulla Forsell.

Among those attending the opening was So Jin-sook, who lived in Sweden for about 30 years. In the exhibition, she presents a series of Asian-style pieces, such as textiles inspired by bojagi (wrapping cloth).

“Swedish and Korean craft artists are now interacting with each other through the Internet,” So said. “More Korean artists are seeking inspiration in other countries and Swedish artists are also imitating Asian styles, such as clothing with Japanese-style sleeves.

“I want to pursue Korean traditions, such as bojagi-inspired textiles. Although I lived for years in Sweden, I express an Asian spirit in my pieces because of my background in Korea.”

Zeon Nam-jin, KFCC’s executive vice president, said at the opening: “Sweden is an ally that provided aid during the Korean War. Although the two countries are far apart in distance, we hope a bilateral relationship will develop through cultural exchanges like this.”