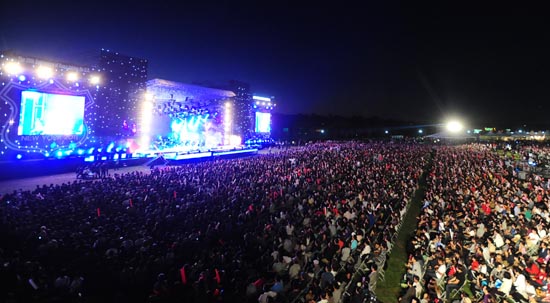 About 15,000 K-pop fans cheer for their favorite Hallyu (Korean Wave) singers, including 2PM, TVXQ, SHINee and 4Minute, at the 2011 KBS Concert at the New York Korean Festival on Oct. 9 at Overpeck County Park in Ridgefield Park, New Jersey. The concert was part of a two-day event commemorating the 20th anniversary of Korea’s admission into the United Nations as well as promoting Korean culture through music. Another 20,000 fans watched their favorite pop stars on the big screen in the park outside the concert venue. By Jung Kyung-min