The return of the Korean Grand Prix is just two days away and organizers are saying that this year’s Formula One event will dodge last year’s mishaps.

Entering its sophomore year, the 2011 F1 Korean Grand Prix will be full throttle from Friday to Sunday at the Korea International Circuit in Yeongam, South Jeolla.

The first day will include two practice sessions, followed by the qualifying run on Day 2. The final race is at 3 p.m. on Sunday.

For Koreans, this will be the last major international sporting event of the year, after the World Championships in Athletics in Daegu last month.

In fact, Koreans will be able to see another great competition of speed. Only this time it won’t be world-class track stars who will be racing down the track, but 750-horsepower machines that can reach speeds up to 350 kilometers (217 miles) per hour. 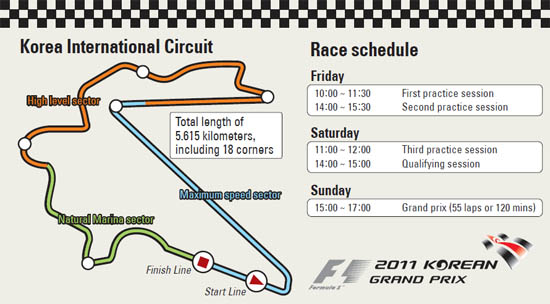 Last year’s inaugural Korean Grand Prix was plagued by poor preparation, resulting in heavy traffic to and from the venue, inadequate accommodations and unfinished construction projects.

Almost every basic operation of the event turned out to be a failure. As a result, the Korea Auto Valley Operation (KAVO) has been axed from the management and organizing committee and the South Jeolla government has stepped up to take care of the business of the event.

For access to the circuit, the committee said it will open a detour road temporarily during the weekend which will lessen 40 percent of traffic volume near Yeongsan River and save more than 30 minutes of travel time.

The organizers said it has also increased public transportation options, including the KTX, airplanes and express buses, all stopping in Yeongam, a city located 384 kilometers (238 miles) southwest of Seoul.

For accommodation, organizers said it had secured 42,000 rooms for the Grand Prix, surpassing the expected 32,000 rooms needed for the three-day event.

With no major hotels nearby, last year’s event was heavily criticized for “inappropriate” accommodations such as love motels. But the organizing committee said that some of these motels would be upgraded to provide hotel-class services, such as breakfast, laundry and translators.

The overall construction of the circuit finally came to an end last month. It first started in December of 2007.

Last year, the 5.615-kilometer racing track of the Korea International Circuit was completed just two weeks prior to the event and approved by the International Automobile Federation (FIA) just 10 days before the race, leaving other facilities still under construction.

But the organizers also said they have finished other remaining core facilities of the circuit, such as the main gate, which features a traditional Korean tower, as well as temporary seating.

F1 ticket gets you into other fun events

Last year, KAVO gave away thousands of free tickets and offered a 50-percent discount on others to help fill seats. But this year ticket sales are going well so far. The organizers announced last month that corporate suites and the “I” and “J” stands are all sold out.

In fact, the overall ticket price is about 30-percent lower than last year. The cheapest tickets for this year’s race are available at 87,000 won ($74) instead of 128,700 last year. According to the organizers, the price of the cheapest tickets was lowered to an even more affordable level while premium seats remained at costs similar to other countries.

Those who have F1 tickets can watch more than just the race.

Ticket holders can watch free K-Pop concerts on the grounds on Saturday, and go to major tourist spots for free or discounted prices.

The race is not over

Since Red Bull’s Sebastian Vettel has been confirmed as this year’s champion as well as the youngest back-to-back champion in F1 history after the Japanese Grand Prix last week, some fans might have worried that this year’s Korean Grand Prix will not present an intense atmosphere like last year.

The race, however, still continues for the 24-year-old who said over the weekend that he had no intention to ease off despite sealing the championship.

In fact, in the last year’s Korean Grand Prix, the German had to retire the race because of an engine problem which occurred on the 46th lap, just nine laps before the finish.

Vettel may eye to level his idol Michael Schumacher’s most wins in a single season. Schumacher collected 13 wins from 18 events in 2004 and Vettel currently has nine in 15 races with four Grands Prix remaining.

The Red Bull driver also has the opportunity to set a new record with pole positions. If Vettel wins three more times in qualification, he will break Nigel Mansell’s record of 14 which was set in 1992.

Other than Vettel, the race for this season’s runner-up is still heating up among four top drivers. While McLaren’s Jenson Button leads the group with 210 points after winning the Japanese Grand Prix, Ferrari’s Fernando Alonso, last year’s Korean Grand Prix champion, is chasing the Briton and is just eight points behind.