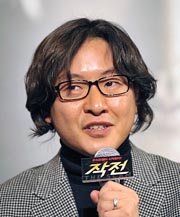 BUSAN - Ordinary people presented iPhone-made shorts on the sidelines of the Busan International Film Festival over the weekend, demonstrating even a 12-year-old can venture into filmmaking as the high-tech handset lowers the age threshold.

Despite featuring no film luminaries and drawing much smaller audiences than the festival’s official selections, these smartphone flicks show how amateurs can take advantage of technology to turn their mundane life into cinematic art.

“The biggest advantage of smartphones is that it is a phone, not a camera. It is always in your pocket,” Lee Ho-jae, a professional director, told audiences at Haeundae Beach. Lee has led iPhone filmmaking classes for amateurs over the past year in Seoul.

Because people carry their phones with them all the time, a smartphone camera is always at their fingertips whenever they want to capture everyday life on a whim, Lee said.

Sponsored by telecom company KT Corp., the amateur iPhone movies screened this year in Busan catered to Korean cineastes with a penchant for cutting-edge digital technology.

Lee, the director of the 2009 local box-office success “Scam,” said he believes digital features in smartphones, such as voice calls, gyroscopes, light and other sensors, will push film artists to create new pictures.

“Traditionally, movies were shown at movie theaters. But carrying tablets and smartphones in one’s pocket is like having a personal movie theater at your fingertips,” he said. His first iPhone movie, “Vertical Limit,” chronicles the day of a young woman who is an iPhone user. Shot at a vertical angle, the way most people hold their smartphones, the five-minute short was an attempt to explore how users can interactively participate in the readymade film, Lee said.