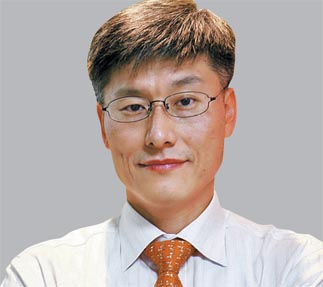 Many would view the biography of Lim Il-taek as an ideal success story of IT talent in Korea.

Lim is currently the president and CEO of Nextreaming, an IT start-up firm that provides video-playing solutions for mobile devices rolled out by Samsung, LG, Motorola and Sony Ericsson, among others. With bachelor’s, master’s and doctoral degrees in electrical engineering from the prestigious Seoul National University, Lim worked as a researcher at LG Electronics for years.

During the so-called “venture boom” in Korea in the early 2000s, when one entrepreneur after another set up an IT start-up, Lim also set up his own business. Nextreaming has been growing and prospering, benefitting from the recent smartphone boom.

Lim is also well known for filing a complaint in 2006 with the Fair Trade Commission against U.S. chipmaker Qualcomm for misusing its monopolistic market position and hindering fair competition with smaller firms.

Lim recognizes he has been fortunate, as many start-ups that emerged in the same period have failed. Now that the country is talking about another round of a venture boom, Lim says that the Korean start-up world needs to reboot so that young, passionate entrepreneurs can try out their ideas and talent without the fear of becoming penniless or jobless.


Q. Next year marks the 10th anniversary of your start-up company. What would you say was the biggest achievement over the years? You quit your job at a large corporation and started your own business. What was the experience like?

A. Unlike some other start-up companies, our key product has been the same from the get-go. We make solutions for media players in mobile devices such as mobile phones, smartphones and car navigation systems.

Business is booming and will likely continue to boom because today’s IT business requires a solution for media players. Whichever needs visual aid - the smartphones and tablets as well as the desks in classrooms and whiteboards in the conference rooms - will get an LCD [liquid crystal display] screen.

LCD, which was once deemed expensive equipment for select devices, will be a common sight in the near future. Already we are seeing signs: the prices of LCD have been going down for months now.

Our goal is to become the standardized, de facto solution for media players worldwide - like the Microsoft Word for word processors.

When I was working at LG Electronics [from 1994 to 2000], the engineers would work hard to achieve research results but few got translated into actual products - which was very discouraging. That is why I decided to start my own company, so I could create and develop products that get introduced in the market.

The world is mourning the death of Steve Jobs, the co-founder of Apple, whose creations inspired and challenged Korean companies. And as a result of “the iPhone shock,” Korea is seeing another round of a start-up boom nowadays with growing calls that Korea should focus more on the development of software rather than hardware. What are your insights?

People are saying that we should learn from Apple and improve software capabilities, but I want to point out that it was both strong hardware and strong software that made iPhones successful.

The adoption of the operating system that was originally optimized for large data centers, doing away with stylus and opting for touch-based screens - these are hardware features of iPhones.

They were deemed impossible but Apple made them possible and marketable. That’s what made iPhones successful.

Software, such as the application store and applications, are of course also important but they are built around strong hardware.

As far as the venture boom goes, there is one big difference between Korean and U.S. IT start-up scenes: the risk of failing.

In the United States, even if entrepreneurs fail their personal finances aren’t bankrupted because they are financed by “angel” investors or venture capital.

Failing is not necessarily bad because you get better with experience. But because of such a systemic difference, entrepreneurs in the United States that fail can restart and build on past failures, while entrepreneurs in Korea rarely get a second chance.

This is also why all the brilliant students and highly qualified talent would rather go for stable jobs like doctors and lawyers where competition is scarce, instead of the IT sector where there are many trials and errors. Competition is healthy. It’s when there is no need to compete that problems arise.

Lastly, what’s your view on Korean IT start-up companies being sold to foreign corporations? There are concerns in the industry that the country’s “veins of gold” are all being mined by foreign companies.

Let me start with an example. Can you tell which country Phillips [an electronics firm] is from? Some may know that it’s headquartered in the Netherlands, but I think many may not know that. It is because the company has become multinational over the years through its various operations.

When a start-up company of country A is sold to a corporation of country B, country A could benefit a lot: the region’s business capabilities could improve, the region’s products could reach a wider audience, the start-up’s talent could work in the corporation’s C-suite, among other potential benefits.