For Na, questions about Japan and the disabled

For Na, questions about Japan and the disabled 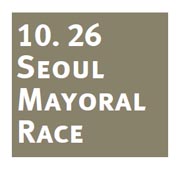 Former Representative Na Kyung-won, the 47-year-old judge-turned-politician running for Seoul mayor for the ruling Grand National Party, is in the cross-hairs of the opposition Democratic Party, and she’s already taken some painful hits on sensitive issues.

For the past week, Na has been criticized for attending an event hosted by the Japanese Embassy in July 2004 to celebrate the 50th anniversary of the foundation of Japan’s Self-Defense Forces.

In response to the criticism, Na posted a message on Twitter saying she made an innocent mistake going to the event. “I was a first-term lawmaker with little experience,” Na wrote. “I went there without knowing the specifics of the event but left when I realized belatedly.”

Her explanation, however, fanned the flames.

The Korean Council for the Women Drafted for Military Sexual Slavery by Japan said it had sent fax messages to five lawmakers invited to the event, including Na, to tell them not to attend.

Na’s office said lots of fax messages arrive every day in her office, and Na does not check them all personally.

“Na should admit frankly her wrongdoings and apologize,” said Kim Hyun, deputy spokeswoman of the Democratic Party, in a statement. “It is never acceptable for a politician to lie about her actions because she’s scared of judgment. Allowing such a person to represent 10 million Seoul residents should never happen.”

Na was also accused of actively opposing the Roh Moo-hyun administration’s attempt to reform private school foundations in 2005 because her father is in the private school industry. At the time, the Uri Party attempted to revise laws governing private schools, but the Grand National Party disagreed.

Na’s father is chairman of the board of directors of Heungshin School, which operates three private schools.

Na said her opposition against the revision was based on the GNP’s official platform, not because of her personal interests. “I was not even a member of the National Assembly’s [Education, Science and Technology Committee], which handled the bill,” she said.

Na was also criticized for exploiting the disabled. On Sept. 26, she visited a shelter for disabled children in the Yongsan District of Seoul, where she washed blankets and helped the children during their meal and bath time.

While helping a 12-year-old boy bathe, he was shown naked in front of the media, and the Democratic Party fiercely condemned Na for using the child in such a way.

Human Rights Commission to investigate Na’s visit to the shelter.

As the criticism of Na snowballed, Representative Kang Seung-kyoo, who works as Na’s chief of staff, posted a message on his homepage to defend her.

“A photographer who is a friend of Na had obtained permission from the shelter’s head to record Na’s volunteer works,” Kang wrote. “Some photo journalists failed to respect the rules and published the photos.”

Kang also said Na was hurt by the criticisms. “She is a mother who has cared for her own disabled child throughout her life,” Kang wrote. “That makes this situation bitter.”

The elder of Na’s two children has Down syndrome. In an interview with YTN radio on Sept. 28, Na said she felt extremely sad about the situation.

“I have nothing more to say to those who attack me over the rights of the disabled,” she said. “There may be no other person who thought about this issue as deeply as I have.”

While the GNP has formed a team to research the past of liberal mayor candidate Park Won-soon to find the skeletons, Na plans to focus on her clean image. She is trying to overcome her image of having an elite past to build more connections with voters.

A graduate of Seoul National University’s law school, Na started her career as a judge.

Shortly after joining politics in 2004 by becoming a proportional representative for the GNP, she was named Grand National Party spokeswoman in 2006, becoming an instant celebrity in a political arena largely dominated by men. Her popularity was confirmed when she won a National Assembly seat in the 2008 general election to begin her second term.

According to the National Election Commission, Na reported nearly 4.1 billion won ($3.5 million) in assets, including a two-carat diamond and 1.8 billion won worth of real estate.

Na’s campaign also faced public criticism as its spokesman, GNP lawmaker Shin Ji-ho, attended a TV debate with representatives of Park’s campaign Thursday under the influence of alcohol. As criticism spread, Shin stepped down from the post.