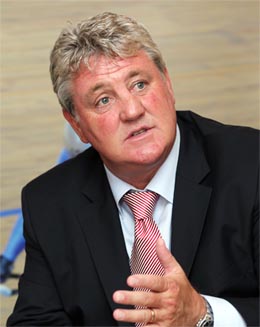 Sunderland AFC manager Steve Bruce said that Korean footballers are no longer thought of as “lacking physical strength,” but, in fact, have impressed the football world with their work ethic.

The 50-year-old manager, from Corbridge in England’s northeast, said during the welcoming ceremony at Briton Embassy in Seoul on Monday that he was visiting Korea not only to check on his club striker Ji Dong-won, but also other Korean footballers playing in the third round of the Asian qualifier for the 2014 World Cup on Tuesday.

“As a manager, it’s my job to follow and watch our players’ national team matches,” Bruce said. “If we could bring some other good youngsters in, it will be terrific.”

Bruce said that Korean football has improved much in the last decade.

“Korea had a fantastic rise over the last 10 years,” Bruce said. “They went to the semifinals in the World Cup and they’re already a good team.”

The former Birmingham City and Crystal Palace manager said that he had heard good things about Korean footballers from Guus Hiddink while the Dutchman managed Chelsea FC. Hiddink is famously known for leading Korea to the semifinals in the 2002 World Cup.

“The big thing we like about Korean players is the great desire they have to succeed,” Bruce said. “They have a great work ethic.”

However, Bruce said certain conditions should be met first in order for Koreans to play in the English Premier League, namely a work permit.

“As we know, getting a work permit is a big problem,” Bruce said. “They have to play for the national team in order to play in England.”

However, once players are able to receive a work permit, the former Manchester United captain said that Koreans have the mentality and ability to survive in the EPL.

“I wouldn’t be surprised if many Korean players are playing in England,” Bruce said. “They’ve already proved that they are no longer lacking physical strength.”

There are currently four Koreans playing in the EPL - Park Ji-sung of Manchester United, Lee Chung-yong of Bolton Wanders, Park Chu-young of Arsenal and Ji, whom Bruce reportedly paid $3.5 million for this season.

Bruce said one of the reasons why he secured Ji, other than his “wonderful attitude,” was his versatility in attacking.

“Ji runs everywhere around the pitch and wants to do everybody’s job because of his hunger,” Bruce said. “But we must make him a striker and he must score goals.”

Ji got his debut EPL goal against Chelsea last month, but hasn’t started for Sunderland yet. Bruce said he will treat Ji “gently,” because he is young, but hinted that he might start against Arsenal on Sunday.

Nicklas Bendtner can’t play because of a clause in his contract about playing against Arsenal, his former employer, and Connor Wickham is doubtful due to a groin injury, according to Bruce.

That leaves only Ji and Stephane Sessegnon as Sunderland’s attacking options.