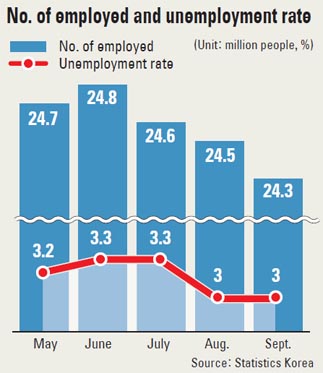 The rate of unemployment stood at 3 percent last month, down from 3.4 percent one year earlier, according to the report by Statistics Korea.

The report showed that Korea had 264,000 more jobs in September than during the same period last year. In August, however, the difference was 490,000.

This marks the first time all year that the number of new jobs per month, in annualized terms, had dropped below 300,000.

The government is aiming for an average of 330,000 new positions this year.

The data comes as the government has been working to encourage companies to hire more workers, believing that more jobs will boost domestic demand and eventually lead to economic recovery.

But external economic conditions remain grim as the fiscal debt crisis in the euro zone and a slowing recovery in the United States raises concerns about a double-dip recession.

Recent indicators show that the export-driven Korean economy might face heightened uncertainty. The nation’s industrial output, for example, shrank for the second straight month in August.

The jobs data showed that manufacturers and builders shed 48,000 and 50,000 jobs last month, respectively, weighing on the overall labor market.